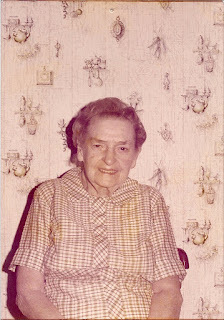 Born Mary Louise Broadhurst in Swansea, Wales in about 1890, this is my paternal, maternal, great grandmother.  My father's mother's mother.  She lived to about 90.  As a teenager she married an English miner, turned tunnel builder.  She had two children while living in London, then on the eve of World War I, my great grandfather landed a job digging tunnels in New York City and they moved. They had a third child after moving to the USA. The nature my great grandfather's work involved moving every 2-3 years as a project was finished.  They lived in New York, Memphis, Toledo, Chicago, and Detroit.

She was widowed around the time I was born, and lived in a second floor apartment in her youngest daughter's home for a decade. That ended when the daughter's alcoholism made that no longer safe. She then moved in with my Grandparent's on the farm, literally around the corner from my parents home.  By that time in life, she was legally blind with a lot of health issues.  She walked almost everyday up and down the sun porch on the back of the house and spent hours listening to the radio.  I can remember her speaking in Welsh, once or twice, as a child it frightened me.  When I was a teenager, she got sick one summer, she was in the hospital for a while, then admitted to a nursing home.  She spent the rest of her life between a couple of nursing homes, surviving a broken hip.  Her mind remained strong, but her spirit was broken by illness and isolation in the nursing home.  She died during the summer of 1977, my last summer on the farm.
Posted by Travel at 6:00 AM