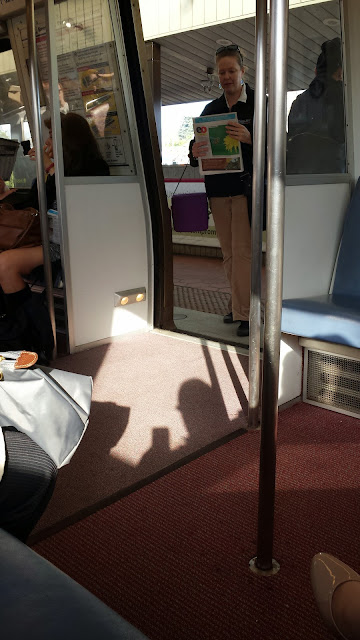 When you ride subway trains, even more ubiquitous than "Mind the Gap" is the announcement to "Stand Clear - Doors Closing."  Every one who rides the trains on a regular basis  has at least once leapt through the closing doors, unsure how they made it. Or even worse gotten caught in the closing doors.  On Tuesday afternoon, here in DC a father traveling with two young children, the oldest being a 5 year old boy, tempted fate with the doors, daddy and the girl made it on, the doors closed leaving the 5 year old boy hysterically pounding on the door as the train moved away.   Someone pulled the emergency stop, daddy pulled the emergency door release and went running down the platform, carrying his daughter to be reunited with his son, and introduced to the transit police.

The police investigation took a while, meanwhile two very busy lines were blocked and later single tracking. The police declined to write an official report (why do we have transit police) and daddy was not charged.  But 20 to 30 minute delays stretched well into the evening rush on two lines, inconveniencing thousands of commuters, I know, I was stuck in it standing on a platform waiting for a train that then moved at about half speed.  It takes a while for metro to get things back in sync.

My father use to say, "never run after a streetcar or a woman, there will be another one along in a minute." My mother eventually cured him of saying this.  But, why risk the safety of yourself, or your children, to try to jump onto a train after the warning to "stand clear - doors closing?"  I posted a comment that the father bears at least some responsibility for this incidence on a story on Facebook.  The comment received numerous likes and one comment, a mother who said "you must be a complete idiot."  If there is a god, please watch out for her children, they need all the help they can get.
Posted by Travel at 6:00 AM