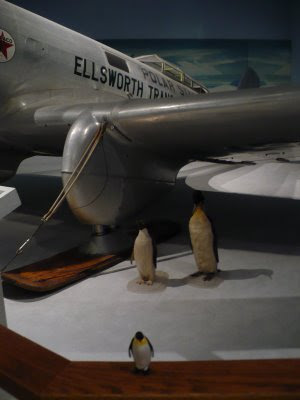 It is cold and icy across the country. WH is home without power. Nasty, icy, reminds me of home and why I don't want to go back.
TR
Posted by Travel at 8:18 PM 3 comments: 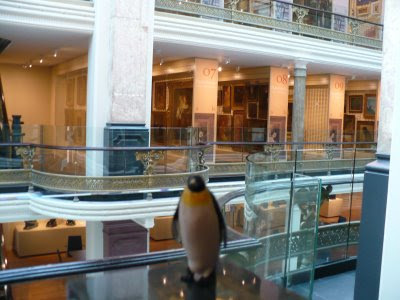 It is estimated that a million out of town visitors spent a billion-dollars in DC this week, what a great way to stimulate the economy. Run the cowboy out of town. Former President Jimmy Carter gets the quote of the week, as the helcopter took off from the east side of the Capital carrying former President George W Bush off to fly home to Texas, Jimmy Carter turned to the person next to him and said, "I've been waiting eight years to watch that helcopter take off."

When DG passed through the subway station yesterday evening on his way home there was a duck sitting there preening itself in the place that the homeless woman with the goatee normally sits surrounded by pigeons. I wonder what happened to the pigeons? (Be careful when typing the word Duck, the D and the F keys are to close together and spell check won't catch that one.)

Three or four afternons a week we walk past a man sitting on a box holding out an empty starbucks cup asking for spare change. The other afternoon we were a little early and traffic was heavey and there he was, sitting in his new car waiting to turn into the parking garage, commuting to work.


Another nice week in the Nations Capital,

I think I may stay home on Tuesday

Don't feed the pigeons
On the day of Richard Nixon's 1973 inauguration, Pennsylvania Avenue was dotted with sick and dead pigeons. At the president's request, the inauguration committee spent $13,000 to spread a chemical bird repellent on the tree branches along the parade route to deter the pigeons. According to the Washington Post, the chemicals in Roost-No-More were supposed to cause the birds' feet to itch so they wouldn't roost in the trees. Unfortunately, the birds ate the repellent, causing them to get sick and die along the parade route.

Turn up the heat
After the north wing of the Treasury Building proved too small for President Ulysses S. Grant's first inaugural ball in 1869, a temporary structure was built in Judiciary Square for his second inaugural ball in 1873. Unfortunately, the structure had no heat or insulation, so guests danced in their coats and hats to stay warm in the minus-4-degree temperature, according to the Joint Congressional Committee on Inaugural Events. Making matters worse, the food was cold, the hot chocolate and coffee ran out and the poor caged canaries -- used as decorations -- froze to death. 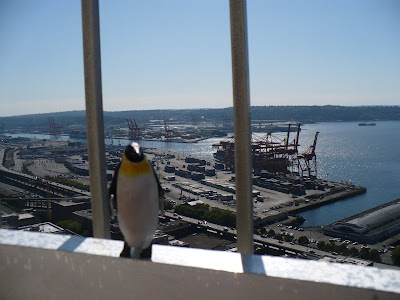 DG braved the cold and was at his desk at 7:55 AM this fine cold morning. He shook the mouse on his computer to wake it up from it's slumber and nothing happened. He pressed the magic buttons and nothing. Cold, dark nothing. The computer had died in it's sleep overnight. He called the IT "customer care" number and was connected to Chicago, no one cares that early in the morning on the east coast. He was told that a work order was being dispatched and someone would be by shortly. He caught up on his reading, cleared off the desk, did email on his phone, contemplated joining the computer, called home, and waited. The Polish computer technician arrived about 9:30. She tried pressing the start button, checked to see that things were plugged in, took the battery out and tried jump starting the computer and said, "itis-dead." She went to fetch a loaner, aka the last semi working model of a laptop designed for Windows 2000. That was made somewhat functional by 10:30. He spent 15 minutes trying to decide if he should scream or cry when she explained the largest professional membership organization in the world (oops too much information) does not sync files from the work stations to the file servers automatically. The three hours of tedious work on Thursday afternoon exist only on the hard drive of the dead computer. About 11:00 he got a call from IT saying that that they had transplanted the hard drive from the deceased into a new body and it appeared to be working. By then it was time for a phone interview for a summer intern (who stood us up for the second time this week, she won't be getting a job offer - it is a paid internship in DC at the brand name organization in the industry and she sets a time for us to call her and then does not answer the phone -- - - - - - - her mental health or ours? - - - IN THIS JOB MARKET - she must be nuts. After that he has a meeting and a working lunch and lunch and then back to the office to find the successful transplant patient working. It is cold and DG actually got about 12 minutes work done in the office today. Not worth getting out of bed for. Work has been emailed home and 3-4 hours work will get done over the long weekend.

Some days it does not pay to get out of the nest, 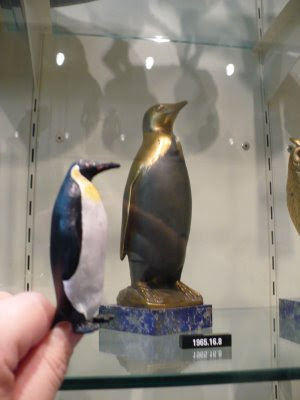 I ran across Uncle Herbert the ofher day at the Smithsonian National Portrait Gallery. He is has a very important job there but he does not want to talk about it because he is working under cover of glass.
TR
Posted by Travel at 5:53 AM 3 comments: 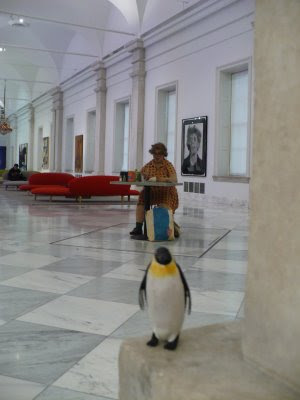 You run into the most interesting people in the museums in DC. This lady has been camped out in the Modern Art collection at the National Portrait Gallery for sometime.
TR
Posted by Travel at 9:14 PM 4 comments: 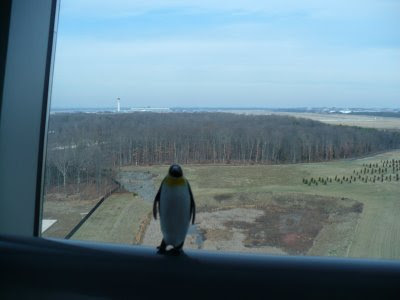 Where do I want to go today? Flying off to someplace warm and sunny sounds like a wonderful idea, but flying is not easy for me to do without help. Is there a herring museum around anyplace close? 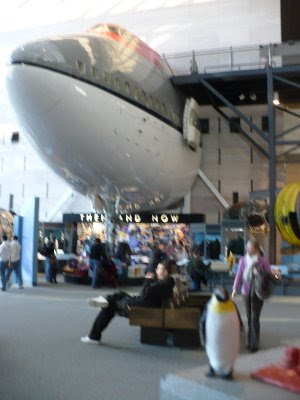 Northwest Airlines proudly announces their latest arrival at the Smithsonian, really quite amazing. But the Museum of Science and Industry in Chicago has the entire fuselage and one wing hanging from the ceiling.
TR
Posted by Travel at 5:18 PM 4 comments: 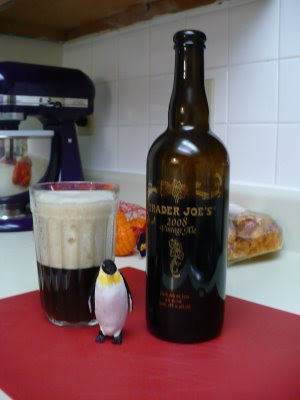 I was just finishing up the Christmas leftovers this evening. Cheers!
TR
Posted by Travel at 10:19 PM 3 comments: 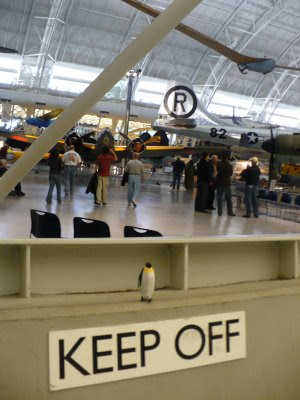 Happy New Years and welcome to 2009!
Think outside the box, color outside the lines, be creative and have fun this year!
TR
Posted by Travel at 8:40 AM 2 comments: