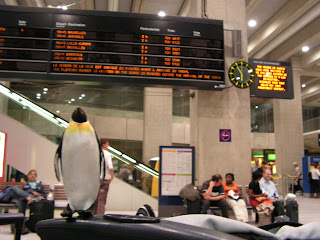 The US is not alone in having air travel snafus. Here I am waiting for my train to leave the airport in Paris. Now we had not planned on taking the train. DG got the bright idea that flying would be faster, so he booked airline tickets from Amsterdam to Paris and Paris to Rennes down on the Normandy Britney coast of France. The flight from Amsterdam to Paris was delayed about 40 minutes, leaving a 30 minute mad dash to change terminals and planes in Paris. We made it to the gate in record time just as the line was forming to board. Very good. We stood for about 15 minutes and they announced a slight delay. About 30 minutes later they announced that the flight crew had boarded the aircraft and we would be ready to board momentarily. About 15 minutes later they put us on the bus that would take us all out to the plane. Then they made an announcement entirely in French that I could not hear over the screaming 2 year old and everyone started getting off the bus. Now it was about 65 degrees and raining outside, so the terminal was shut up like a thermos bottle with the heat turned up to about 85. After an hour or so the apparent need for improved marketing of deodorant in Europe appeared. Another half an hour or so and they cancelled the flight for technical reasons.

At this point it was fun to watch the French mob scene. Several people argued with the gate attendants that they couldn’t cancel the flight. Then they argued that the airline had to find us another airline. Then the mob finally won an argument that if they were going to keep us there they had to bring us food and drink (20 minutes later a cart arrived laden with sandwiches and soft drinks; god bless the French.) About an hour later they announced that they had figured out how to accommodate all of us and that we needed to go to baggage claim 12 and pick up our luggage and meet them at check-in 14.

The mob stood around and stared in disbelief. I verified 12 and 14 and stared for the door, just then a woman in a wheelchair stood-up (she can stand?) and bellowed in French that even I could understand that this was just a plot to get rid of us, and the moment we were out of sight the gate crew would disappear and leave us stranded (I still am surprised that I was able to understand that much French, an hour earlier a 2 year old had left me in the dust with his reply to me syaing to him in French, my name is TR and what is your name? That is the last time I tangle with French 2 year old.)

After a minute, I and about half of the mob headed for the baggage claim through a back door that bypassed the security check-point (held open by one of the friendly airline employees.) We went back and forth several times and I finally abandoned the mob, found the baggage claim and 30 seconds later had my bag and was on my way to check-in 14.

I am headed down the way and there is check-in 10, 11 and 12 and a wall. Oh god, maybe she was right! Where is check-in 14? I fumble around for a couple of minutes and finally ask the guy manning the metal detector and x-ray machine at a security check point. It took a minute to explain what I needed in my limited French and his even more limited English. While we are doing this a woman walked up the check point, held up her ticket and passport for no one to see, walked through setting off the metal detector and went on to catch her flight. He looked up, shrugged and ignored her; he was trying to help me (who says the French are rude.) When he finally figured out where I needed to go (down one floor) he unlocked a back door so that I could take the short-cut down (think I bypassed another security check point.)

I was first in line and yes Air France had a solution, they would put me on a train that left 6 ½ hours after the plane was scheduled to leave and get me close to my destination at 9:25 at night, instead of 2:30 in the afternoon. Away we go, the train was on time and it was only a $24 taxi ride from the train station to the aiport to pick up my rental car. I called and naturally the rental car desk in the train station closed 25 minutes before the train arrived. 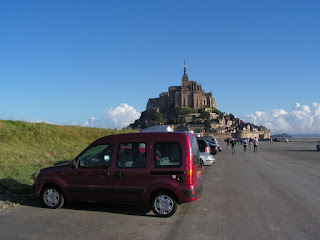 Fun little car to drive. It reminded me of a French Plumbers van.
Next time I’ll take the train. Penguins just aren’t meant to fly.

Alternative Nest In Case of Siege By Fuzzy Rodents 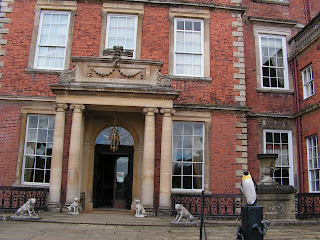 Everyone needs a little place to hide out, in the event of siege by fuzzy rodents. I think this place might work. It had a great library and study, and a whole room filled with a collection of chamber pots. Penguins have never used chamber pots . . . I really don’t see the point.

A little place in the English Countryside 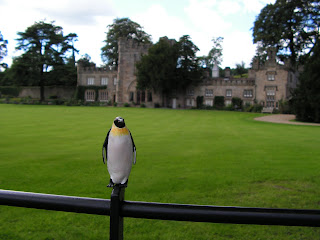 Millions of people dream about owning a little place in the English countryside. A weekend get-away. Here is a fine example. Nothing fancy or flashey, just a few dozen rooms and plenty of space for friends to park when they come to visit. I could see myself feathering this as a nice little weekend nest. DG needs to win the power-ball lottery . . . and SOON!

The crenulated tower would come in handy when old "You Know Who" decides to invade with his band of merry rodents.
Posted by Travel at 7:18 AM 3 comments:

Congratulations To Mr and Mrs Squirrel 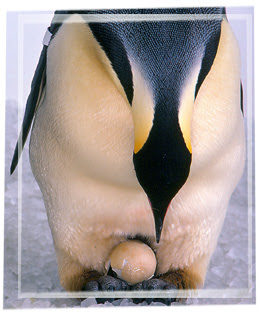 Now how long will this take to hatch? 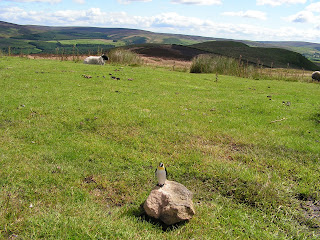 Here I am out to pasture with the sheep in Yorkshire. DG is actually getting closer to being put out to pasture, but I won't comment on his aging.
I was surprised by the open range in Yorkshire. The sheep have such fluffy feathers and are so at ease on the range.
TR
Posted by Travel at 7:10 AM 4 comments: 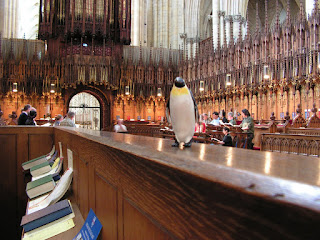 Here I am practicing with the York Minster Cathedral chorus. A flightless fowl really adds depth to the sound. 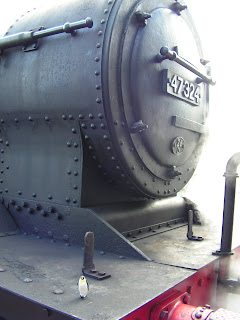 One of the few things on my must see list for 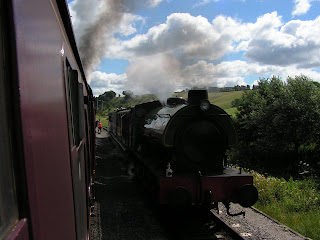 Yorkshire was to ride a steam train. There are several lines that actively run live steam locomotives. To make these even more special they are coal fired (increasingly around the world you find steam trains run on oil fired boilers. Oil is cleaner and easier.) This line had two different locomotives running this day, we had the rare pleasure of watching two steam trains pass one another. Just like when DG's great grandmother lived in England and Wales 100 years ago.

In defense of Bert's Driving 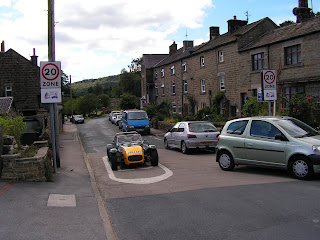 Here is a trypical Yorkshire street (Woodchuck, note the neat little sports car.) This is actually just down the street from Imperial Headquarters. 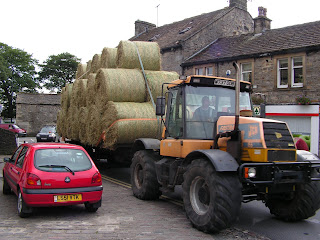 Here is what kept careening down the road straight at Bert.

The RABBITS, they are another matter. 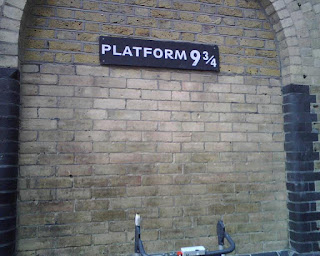 On my way Hogwarts, this shows how short I really am.
TR
Thanks Meritt, I owe you one.
Posted by Travel at 11:37 AM 3 comments:

Sometimes it is all done with smoke and mirrors 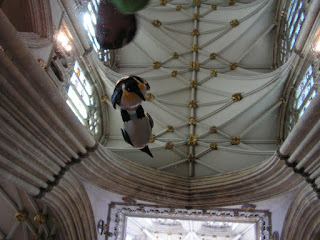 When people meet me for the first time they are frequently surprised by my diminutive stature, I am just a feather over 3.25 inches tall. Most of my pictures are close-ups, making me appear larger then I really am. Remember from school, that you can block out the sun with a penny if you hold it close enough to your eye, well the same is true of a penguin. Hold a penguin close enough to your eye and you see nothing else.

Sometimes I am also aided by the creative use of mirrors. In this case the mirror is installed to allow people to view the ceiling in the tower at York Minster. People kept falling over from looking up, so the mirror was installed to allow them to see up by looking down. In this instant it looks like I am standing on the ceiling that is a couple hundred feet above my head. 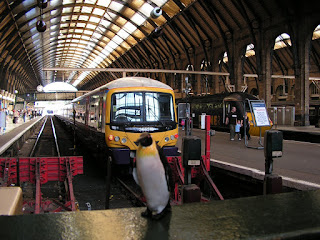 One of the great joys of European travel can be train service. Imagine traveling from city to city and country to country while sitting in a comfortable seat, not packed in like sardines. Being able to walk up and down the isle, even being able to walk to the bar and order a refreshment or two and return to your seat. You buy a ticket, show up and get on. No one questions your motives, forces you to take off all metalic objects and pass through X-ray and metal detectors, no one threatens to strip search you, you just show up, step on board and find a seat. What a civilized way to travel. Here I am in the train termial in York, waiting for Bert and Someone to join us.
TR
Posted by Travel at 7:32 PM 1 comment: 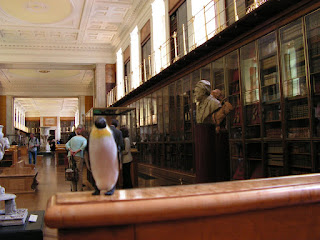 WH and DG have been thinking about re-doing their home office for years. They ran across this little work space in London and though that it would be just ideal. Now all they need to do is tear out the closet, cut through the wall, demolish the neighbors house, build a bridge over the street . . . this will take a while . . . let me get back to you on the final plans . . . I think I can work a four car garage into this one.
TR
Posted by Travel at 7:09 AM 4 comments: 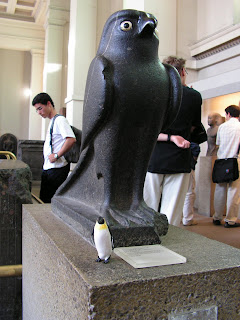 While on tour in England I decided to stop by and visit an old friend. He is a noble bird as only a flightless bird can be. Being on in years he does not get out much and really enjoyed hearing about my travels. He spends his days in the British Museum, just around the corner from the Rosetta Stone. We had a nice visit, but he had other company that day so I moved along; after all there were TRACTORS and RABBITS to be seen.

We went, we saw, we conquered! 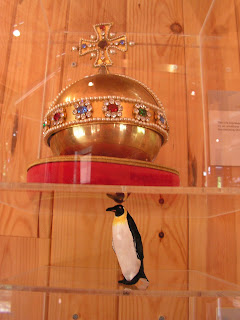 And now we are home. We have weeks worth of things to post about, DG took over 1400 photos; those will take a few days to sort through. Great Brittan was fun and easy as ever. The expansion campaign onto the continent was a drive in the country. Normandy hasn’t been this easy since 1066.

Bert and Someone and Bert’s parents were so much fun, we couldn’t have accomplished it all without Bert’s brave driving in the face of RABITS! and TRACTORS!

More, much more to come, at this point we have been up and going for about 20 hours and sleep is a necessity; but we wanted to let you know that the campaign was a smashing success and the victors have returned with the spoils.