Back to Meeting Land 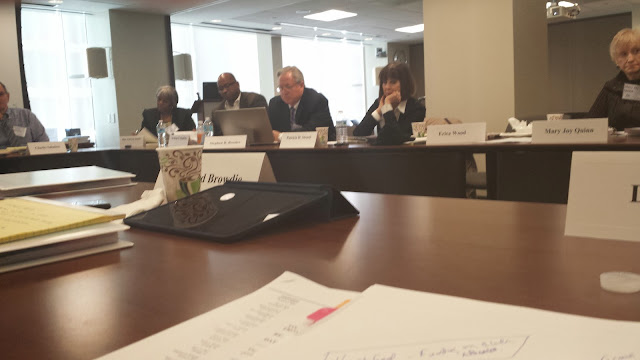 I am about to dive back into the land of endless meetings, emails and phone calls.  I have been doing a few conference calls from home, frankly I am better organizing calls from at from home, then some people are at their offices.  Wednesday I am headed into the City to attend a meeting.  It is an important one, and will be the first official work function since early May. Meeting with an assistant cabinet Secretary about the future of the project that funds most of my work. If she does not have the Presidents phone number, her boss does.

I once watched a training video titled, "Meetings, More Bloody Meetings," produced by John Cleese.  After Faulty Towers, he went on to produce office training videos for a few years.  They were rather interesting. My office email disappeared from my phone a week ago. It was suppose to go in May when I went on extended paid medical leave, but somehow, they didn't kill my phone access.  As a result I have stayed in contact with what was happening, until last week.  The only ugly part of that is my calendar was also wiped off my phone, I only keep one calendar, and it is gone. The first week I was in the hospital, I billed 30 hours of work, all done on my cell phone.  I have joined meetings by conference calls from the car, the beach, mom's house, not a bad way to make a living. I have responded to office email from interesting locations, a cruise ship off the coast of Alaska, I think my all time favorite response to an office email started out as follows, "I am having lunch in Brussels and have a moment to respond."  That is dedication - or insanity.  There is a fine line between the two.
Posted by Travel at 6:00 AM