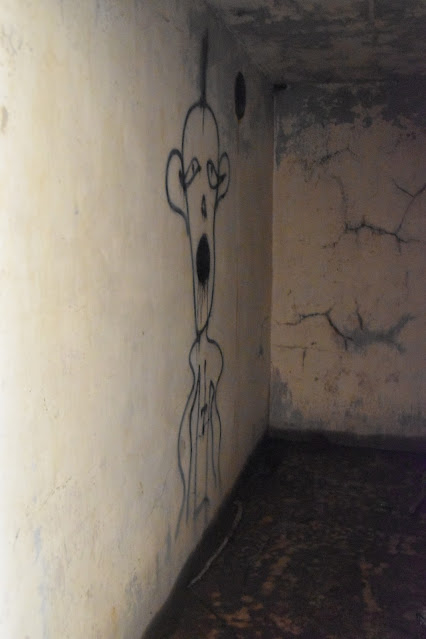 I recently spent an hour exploring the remains of Fort Hunt, along the Potomac River between home and Mt Vernon.  The bunkers are generally locked, open only for special tours, but someone had broken off the lock on one section and the door was propped open.  I didn't spend a lot of time, it was dark and damp, and smelled funny. This was in a room with no light in it, I turned the flash on and took a shot in the dark.

I wonder, what does this represent? Is it a real person? Or someone's desired person, or feared person?  Is it a space alien, or a hallucination from good or bad dreams?

I wonder what does it mean to the person who painted it?  Is it an expression of fear, or love, or longing?  Is it merely a way of leaving a trace that the person who created it was in a forgiven place?

Was it planned, or did it just flow out of the brain of the person who painted it.

Does it appear the way the person hoped it would?

A guy standing near me on the subway recently had an interesting tattoo, it got me to thinking, what does it represent? What does it mean to him? What message does he hope others find in it? These are all complicated layers of meaning.  Meaning is not one dimensional.