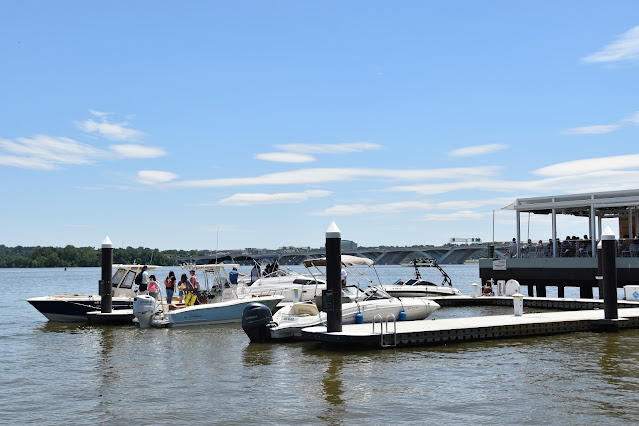 The 5th of July is a great time for me to talk about boats.  From the time I was about 5 years old, when my Aunt Edith married Richard (better known as Dick) the 4th of July Independence Day Holiday was most often spent at their house on the lake.  They owned the house on the lake, because Dick owned a boat, the boat before the house.  It was there that my love of boats developed.

A leisurely ride around the lake in the afternoon sun, taking the boat out to see the fireworks at night, was always one of the highlights of being there.

The general theme of bloggers yesterday was grim, lots of feelings of diminished freedoms.  Lots of people thinking the same way.  I see that as a strength, let's remember that and vote.  Back in 2016 I called out a blogger who voted for a third party candidate and really wanted an "outsider" as President.  The long term impact of that one election is the Supreme Court decisions of June 2022.  That is why every election is critical, not just for the short term, but for the longer term impact.  VOTE people, Vote, Vote, Vote! We are all in this same boat together, we must row together, or we will sink together.

When I was a teenager, K-Mart had aluminum row boats on sale on weekend for $99 adding a second boat to the dock.  Dick shouted directions and I learned to row, and I was free to take the row boat out.  By the time I started to drive the big boat, I was near finishing school and moving south.  They followed a couple of years later, and despite having moved the boat to Florida, it never went in the water again.  The last I knew it was still mildewing away in the far corner of my cousin's yard.  The row boat I believe was included on the sale of the house on the lake, and the buyers offered to pay more if they would take it with them.

I like boats that move at a slow pace, gently gliding.  I seldom turn down an opportunity to take a ride.  When I was going in for surgery the anesthesiologist asked what I was thinking about, and I said, "how big of a boat I should buy if this goes well." He repeated the old joke that "if it floats, flies or fucks, it is cheaper to rent then own."  Then he told me about the airplane we owned.

The scene above.  The old Washington Post newsprint warehouse* on the waterfront in old town Alexandria, Virginia has been replaced with million dollar condos, and two nice restaurants along the water.  One of the restaurants has a bar and tables out on a new pier on the water.  The state funded public moorings attached to the pier to encourage people to come in by boat to eat, drink and shop in old town.  I was delighted to see that people are traveling by boat.

* When the newspaper was printed here in town, paper came in by barge, and was stored along the waterfront.