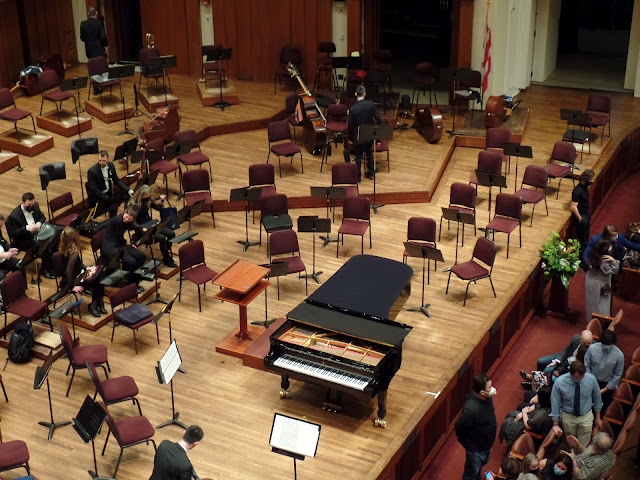 Having been a little odd from a very young age, I fell in love with classical music as a child.  I can remember when I was about 10 hearing the Detroit Symphony play at the Michigan State Fair, my parents had to drag me away - kicking and screaming as I recall.

Three or four years ago, the son of one of Jay's college classmates had an opera premiere at the Kennedy Center for the Performing Arts as part of a young artists series.  We went, and I think we will be forever in favor with the artist and his parents for having done so. (We have met him in New York for dinner a couple of times since then.)  The show was good, the one after his with the dog stole the show (never work with children or animals.)

After that Jay started buying tickets for the National Symphony Orchestra at the Kennedy Center.  Six to eight shows a season.  He looks at what they are playing, and any guest artists or conductors and carefully selects.  I really don't care, I enjoy the show, and for the most part I don't care who is playing what.  When we first returned after Covid shut them down for a year, my thought was what a fabulous noise.

Our favorite seats are up a couple of balconies, and right over the end of the stage. You can see, you can hear. It is simply fab.

Well that was weird, I responded to a comment that was posted, then blogger removed the comment as spam, and I retrieved it out of comment jail.  I do check comments a couple of times a day.  If your comment disappears I will try to get it back (unless you are a spammer, and we know where they can all go.)