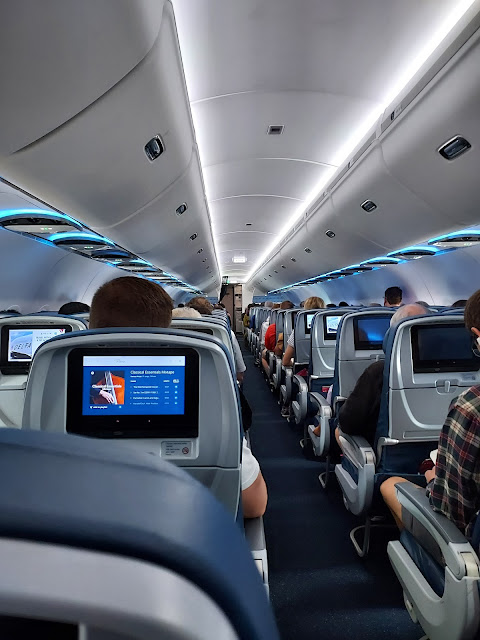 Well Actually the fabulous took place on Thursday, I flew from DC to Detroit.  I have flown a couple of times since returning from Dublin on the eve of the Pandemic shutdown.  This was kind of like a return to the past.

The plane boarded early, left on time, and arrived early.  My bag was on the conveyor by the time I got to baggage claim.

Having grown up around airplanes, turning onto the active runway is when I know it is go time.  I know the flight crew is calling off the check list, take off power set and achieved, airspeed live, speed markers, take off speed, rotate, positive rate of climb, gear up.  I sat there in row 28 of 29, calling those off in my mind.

This is my first solo trip in probably three years.  That might be part of it.  It is nice traveling with someone, when I am out alone it is just me.  I have to find the way, figure things out, and solve any problems.  I also don't have to watch out or keep track of anyone. I miss having someone to rely on. I like both, I probably need both.  It has been too long since I was traveling frequently, even longer since I was traveling solo.

I am staying near the little airport that was home during my early years and teens.  I drove out there.  It is sad.  The old terminal is now offices for a fasciner company.  The new terminal, has some kind of business in it, but it really looked abandoned.  No longer a dealer for Piper or Cessna, or Beech, or Mooney.  No little airplanes parked out back ready to fly.    As they say you can go back, but you really can't go home.

Well this is less perky than it should be.  But it was fantastic to be flying again.  I can only hope that this is the start of doing this more often.  Of deciding I need to be there, and going.  That is fantastic, that feels so normal.  I return home on Sunday.  In the mean time I am going to try to cheer up my dear sister, and have brunch with a former board member.