The Way We Were Wednesday : What's in your wallet? 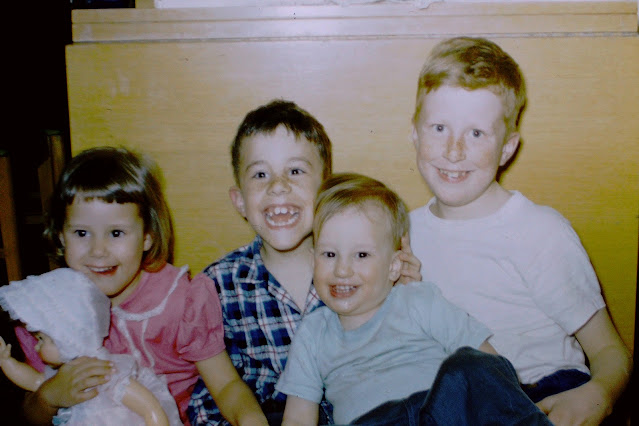 There is a credit card advertisement that asks "what's in your wallet?"  Robert Fulghum who wrote the book "All I need to know, I learned in Kindergarten" wrote in one of his books about doing a staff retreat with a bunch of Pentagon types and having difficulty getting them to open up and talk about themselves beyond, name, rank, and serial number.  He finally asked them to take out their wallets and empty them out on the table, and talk about what was in them and what those contents meant to them.

In my father's wallet there were two photos for decades.  The one above was his favorite picture of his four kids.  The original was a Kodachrome slide* (thankfully the colors are still very true.) He had an early dye transfer print** made and carried it the rest of his life.  The other photo was of the last airplane he owned in the mid-1960's.  He and a friend bought a basket case, stripped it down to the metal frame and rebuilt it from the wheels up.  One of my earliest memories as a child are the wings being recovered in our garage.  That dog eared black and white wallet size print, is now in a silver frame in my case of memories.

I don't carry any photos in my wallet.

* Kodachrome - the dyes for the color were added in processing and were very stable and long lasting.  The processing required complicated and expensive machines. Later color transparency or slide films, the dyes were in the film,  and didn't have the same resilience.  ** In dye transfer printing, each layer of color is created and applied to the paper in the printing process, unlike later photographic papers where the color layers were embedded in the emulsion layer on the paper from the factory. Dye transfer printing is technically much more complex.  When I was using film in the 1970's there were still a few labs that did dye transfer printing, but the cost was ten times what a standard print would be. But the prints last 100 times longer.  Modern ink jet printing, if the dyes are stable, is more like dye transfer printing.