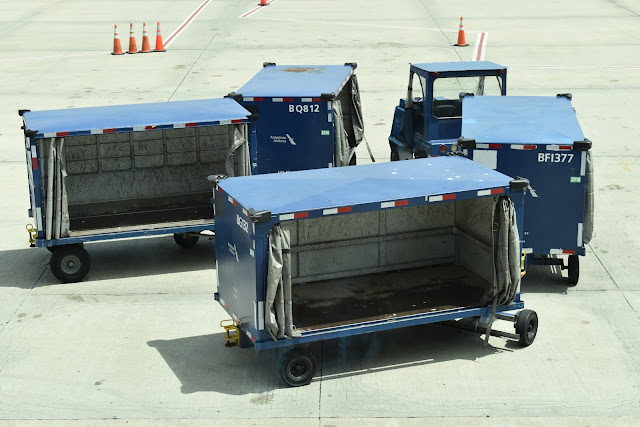 We recently returned from a trip to Rhode Island, Americas tiniest state.  Getting there was uneventful, coming home was an adventure in modern air travel.  Hence this weeks five questions about air travel.

1:  Do you normally get Pre-Check or not?
2: Do you ever encounter a security person at the airport with a sense of humor?
3: Have you ever been spontaneously upgraded to first class?
4: Have you ever had a flight diverted to another airport because of weather?
5: When you easy 50 minute flight, turns into nearly 4 hours on the plane, what do you say to the flight crew when leaving the plane?

My answers
1: I signed up and paid the fee for Global Entry so I qualify for TSA Pre-Check - the expedited airport security and for the automated express lane at customs and immigration.
2: As I was shoving my carry on into the ex-ray machine in Providence the security officer asked me if I had anything metal in my my pockets, or water bottles or soft-drinks in my carry on, I said, no; then she asked if I had an small animals, you know like kittens, or squires or hamster in my carry on?  I said, no, I don't think I have ever been asked that before.  She said, I wanted to see if you were paying attention and you wouldn't believe what people leave in their bags.
3: Jay and I were sitting at the gate talking and the airline agent walked over and asked if we were sitting near one another - we checked, we were across the aisle from one another.  She said "I need to move a few people around, if you don't mind I will move you to better seats." She came back a couple minutes later with seats in row two of first class.
4:  Yup, glad we were in first class, we flew 250 south west of DC and sat at an airport for two hours.

5: Thank you, see you again on my next trip!  I have been surprised at the number of times I have had the same cabin crew, they remember if you are not nice to them.
Posted by Travel at 12:00 AM