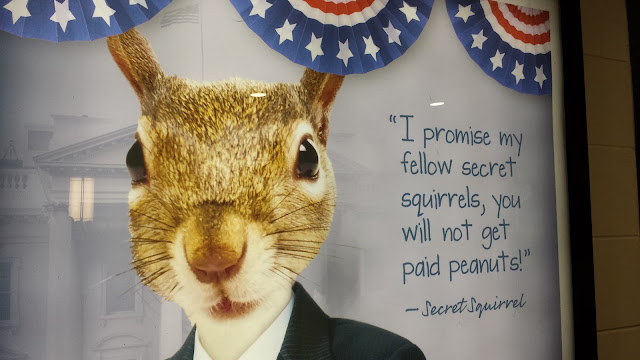 Spies, spin doctors, and intentional misinformation experts, the longer I live and work in DC, the more I realize how many of these there are.  Secret Squirrels are common in this and most other world capitals, but they are also out there in every city, and even in the middle no where.  If they are good, really good, you never know who they are and what they do.

I have met a handful of retired secret squirrels.  Some, though not all, after they have left the office for good, will tell you who they once worked for, a few can even talk in general details about what they did.  The first, John, had worked Presidential security from JFK, to Jimmy Carter. He had started as an air-corp officer in Germany at the end of World War II, he was fluent in German, and was recruited by intelligence to trade in the black-market in post war Germany. It helped to know what was being bought and sold and what the prices were.  His talent was noticed and a career was built.  He didn't tell his wife what he did, until after he retired.  There are a few strange places here in the DC area.  For many year's the Russians owned an apartment building on a hill overlooking the Pentagon for embassy staff to live in.  Yea, the Pentagon didn't really like that.  About the time I moved here it was converted to condos and sold.  I looked at it (great location.)  In the garage there was a stack of safes, I asked and the salesmen said, "when we renovate the apartments, we find a hidden safe in almost every unit."  Yep, it was just Russian embassy staff that lived there.

A few years ago it was revealed that secret squires were reading the email and listening to the cell phone calls of European leaders.  Great indignation was expressed around the world.  Here in town people snickered and said behind their hands "if we hadn't done that, we wouldn't have been doing our jobs, if they aren't trying to read our email, they are not doing their job." And now Rump has encouraged the Russians to spy on US Government Officials and leak the findings, WHAT AN IDIOT, and people think he should be President - - - Maybe it is time to emigrate. It is one thing for secret squirrels to hear and read, and quite another to release stolen messages to the press and public.
Posted by Travel at 12:00 AM