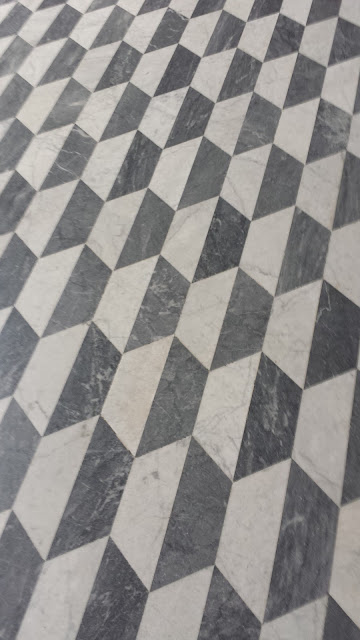 I am in Florida for a few days visiting family.  This has been a difficult trip.

My mother was recently in the hospital, and was discharged home with hospice care a week ago.  Her Parkinson's has progressed to the point that she barely moves.  She aspirates when she eats or drinks, her throat no longer works as it should, her bowels are are shutting down. Her heart has lost it's normal rhythm and beats to it's own drummer.  She has late stage dementia and says very little, and what she does say only sometimes makes sense, though she can answer a direct question, she knew who I was, she has consistently said no to a feeding tube. She sleeps 20+ hours per day. She is kind of like the grand old house that has fallen into disrepair, slowly falling apart, the curtains blowing in the breeze through windows missing on the second floor.  Sad, not a pleasant way to go.

Dad is a tiny shadow of himself, he has lost a lot of weight and has little energy.  He has a host of issues, the electrical circuitry in his heart has shorted out, he is 100% dependent on a pacemaker, he has a growth in his lung, the doctors are not sure what it is, but he is so weak there is not much they could do about it if they did, the treatment would kill him, His kidney function is barely sufficient to keep him alive.  His mind is clear, but he has little to say. He is waiting, he knows what is coming.

The house is kind of like death's waiting room. There is no anticipation of the next great adventure - slowly fading away, inch by inch, is not a pretty way to shuffle off this mortal coil.

My Uncle Richard died a few weeks ago.  Richard, had a tremendous sense of humor and could tell a story like few people I have ever known. I missed the memorial service - we were in Italy at the time.  We had lunch with his son the other day.  He was telling us about the memorial service.   The minister, who knew Richard very well, was telling stories and talking about loss.  He said, "with his passing, there will be a huge Dick shaped hole in the hearts of all of us."  Yes, Richard was known as Dick by his close friends and family, and yes the minister said that, and then realized what he had said.  Half the room cried, the other half chuckled, bit their lips and tried not to laugh out loud.  How appropriate, Dick would have found great humor in this, and would have spent years spinning the story for a good laugh.  I'd sooner they laugh when my time comes.
Posted by Travel at 12:00 AM