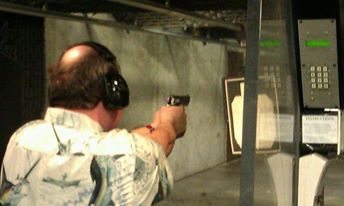 I am a gun owner . . . I will pause while some of you catch your breath and others un-friend me.

I have owned guns since I was a teenager.  I have fired thousands and thousands of rounds of target practise.  I have never shot an animal.

I have more than one gun, and a couple keep a couple of thousand rounds of ammunition on hand - it is much cheaper to buy in 1,000 round cases.

Being election season, every time I turn the TV on some idiot is promising to ban assault weapons.  If you want to frustrate and confuse a politician talking about banning assault weapons,  ask them to define an assault weapon.  Most simply can't.  If they try they will describe a scary looking gun that looks like a military rifle.  The last time Congress took a stab at this they banned "military style" rifles.  The ban was based on looks, not function.  The same caliber, barrel design and ammunition capacity in a nice walnut stock that looked like grandpas deer rifle was just fine, but if it was stripped down with a black plastic stock like a modern army rifle, it was on the banned list. Take the scary looking gun, and repackage it in a pretty package and it was legal (and some manufactures did just that.)

There are meaningful differences between a modern military rifle, the scary looking AR-whatevers.  Nearly all of the the consumer "assault weapons" are semi-automatic, not automatic.  This difference makes a meaningful difference in how fast it can fire, the consumer version is significantly slower. Fully automatic weapons have a tightly regulated permitting system and are somewhat rare in consumer collections.  Now most shooters are not able to handle a fully automatic for bursts of more than 3-5 shots, anything more than that and the gun is nearly uncontrollable unless it on a tripod or rest. At about $1 a round, a fully automatic can go through $50 in ammo in seconds.  There are ranges that own them and will supervise you shooting one, if you want to spend $100 for two minutes of fun (or terror. - I know a place in Scottsdale.)  Both hold a lot of ammo, but then again so does the rabbit hunting rifle my grandfather gave me when I was 14 - it just does not look scary.

I know, I scare the NRA, and the NRA scares me.  They can't believe that a gay moderately liberal democrat could be a gun owner.  I think they are nutty extremists.

Don't fall for the assault weapons rhetoric. The real issue is keeping all guns out of the hands of people who don't value other human lives and improving society so everyone feels valued as a human being. If we put as much effort into providing meaningful mental health and substance abuse treatment as we do into arguing about guns, a lot fewer desperate people would do regrettable things with guns.