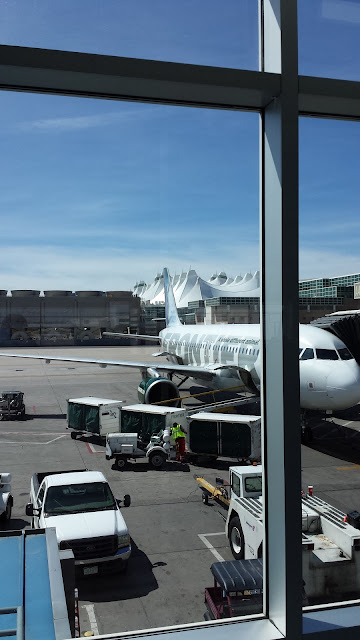 In the ongoing series, name that airport, where was I last week when I took this picture?

Way back in the mid-1980's I was changing planes in the city above, at the old airport near downtown, or more accurately trying to change planes, when they announced plans to build an entirely new airport.  I distinguish between a new terminal and a new airport.  An airport is the runways and taxi ways - the things planes come and go on, the terminal is the building that passengers use to check in, check bags (please check your bags and quit trying to carry all your worldly possession on board,) get on and off planes and such.  It is much easier to build a new terminal than it is to build a new airport.  Airports take up a lot of land.  The problem with today's featured city at the old airport, was they had no land.  The old airport was surrounded by business and homes and it was far to small.  The runways were barely long enough and the terminal so small that when I went to leave, the airplane was there, but they couldn't find a gate for it for over an hour.  The airline personnel came up with a compromise, the plane pulled in close between two gates, and if you could walk down the stairs and out to the plane and climb the stairs to the plane, you were on your way now, if not another plane would use the jet bridge in an hour or so.  So while this was going on, the announcement was made that the city had purchased several thousand acres of land, a bit far out, and would build and entirely new airport and terminals.  Everyone trying to get to Phoenix that day understood why.

The new airport (not so new now, it has been open 25 years or so) is huge, it has tons of runways and an expansive terminal.  The only issue is it is way far out of town.  The good news, is a light rail line will connect it to the city center within a month.
Posted by Travel at 12:00 AM