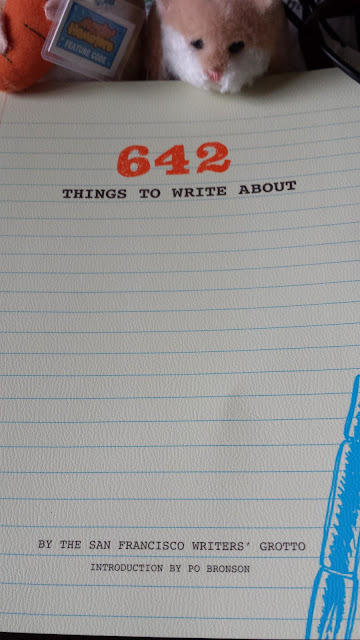 Another Sunday, keeping up with the theme of the year, another 5 questions must be created, answered and posted for others.  I thought this would be easier than it is, I thought I would find other lists of questions or my readers would make suggestions more often.  No such luck, this has stretched my imagination, and that alone probably makes it a good exercise.  Part of the motivation for blogging is to force myself to write, the commitment to posting every day, forces me to write often.  I stumbled across the book above at Target and couldn't resist.  It is published as a workbook with space to write about the 642 things.  Reading the opening page, it was created in 24 hours, with ideas contributed by 35 writers.

1:  Have you ever lost anything to a thief?  Yes, when I was a teenager and my family was in Florida for the winter, someone broke into the house in Michigan and stole my stereo.  I had worked most of one summer to buy a nice Panasonic component system.

2: What was the last thing you bought for yourself that was a major splurge, much more than you should have spent?  The 42-inch flat screen TV in my bedroom that I bought a year ago, when I was getting ready for a long recovery at home.  I do like it.

3: What is your spending threshold for a splurge?  More than $200.  This number has really gone up, I can remember when spending more than $50 was a major splurge.

4: What is the most valuable thing that you have ever found?  Hmm, I don't find a lot of things,  I did find a video camera that a tourist had left behind in Union Station in DC, I turned it in, I hope the person who lost it came back for it.

5: What was the most expensive thing you ever threw away?  A copy machine, I had bought it for my office when I was working for homebuilders in a field office. The company didn't think field offices needed them.  As I recall I paid over $1,000 for it. After I bought one, the company decided that they did make sense and started providing them.  I used it for several years, it needed expensive parts and I couldn't bring myself to toss it. I drug it along when we moved to Kentucky and it was in the garage. I finally told Jay, I am going upstairs for a few minutes and if it is gone when I come back I won't dig it out of the trash.  I never saw it again.
Posted by Travel at 12:00 AM