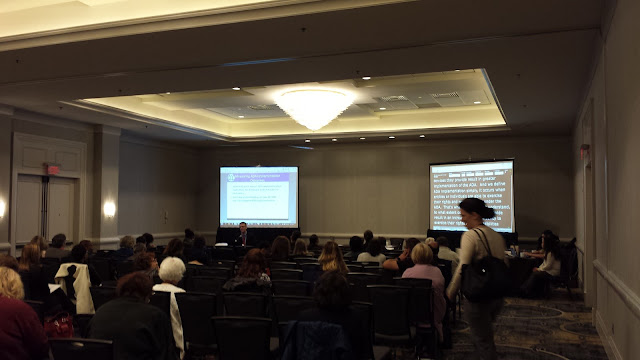 A little afternNoon I stepped out of a conference hotel, into 60 degrees, overcast, about 100% bone-chilling humidity, you know the kind of weather where you can't quite figure out if it is fog, rain, or snow?  Yes, it was gloriously wonderful to be out in the wonderful weather, what a wonderful escape from 2+ hours of death by Powerpoint.  Oh-My-GOOOOOD, how terrible.  The speakers were a bunch of researchers from the University of Chicago and the University of Washington, our federal tax dollars at work.  I am not sure if the research they are doing is finding anything worth hearing, by the time they got to the findings, no one in the room was still alive to hear.

All of them started with the history of the subject, then droned on, and on, and on about the research model, data selection, methods, analysis, color of their mothers' eyes, recited the the 3rd verse of Satanic Verses.  Then maybe, got to the findings.  Even then the data was so dense on the slides, no one could read them.  One person was talking about geographic data distribution, she had maps of the data distribution across the entire 50 states, and included two data sets - in other words two maps of the 50 states - on each slide - you couldn't see a bloody thing. Most of the powerpoints were the outline they were speaking from, or maybe it was their grocery shopping list, the content was so dense and the font so small no one could read them.  At one point one of the speakers apologized for a typo on a slide, a slide that had about 500 words on it and NO ONE COULD READ anyway.

No power point slide should ever have more than 10 words on it.  If you are going to read it, just print it and hand it to the audience and go to starbucks.  If you don't tell the audience the most exciting or important thing you have to say in the first three-minutes, you have lost them and most will never hear what they need to hear.  Think about the TV series, Law and Order - I like the original New York version best, not the whiners and moaners versions.  In the first 2 minutes, they find the dead body and show and tell you what the mystery is going to be, then they go to commercial break  dumm-de-de-dumm-dumm-dumm.  In fishing they call this setting the hook when the fish first takes the bait.  If you don't do it then, you never will.  In the first 2 to 3 minutes you need to tell the audience why they need to listen to the rest of what you have to say.  If you put them to sleep before you get to the good stuff, they will never hear the good stuff.

Great speakers are informative, inspiring and entertaining.  I love great speakers.  There were none to be found this morning.
Posted by Travel at 12:00 AM