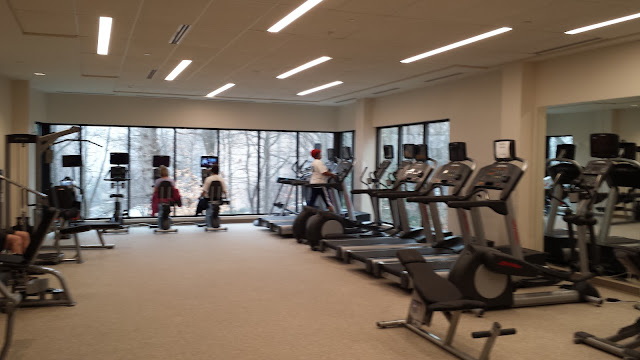 A few months after turning 29, I decided I needed to take charge of my eating and activity level, or I might not be able to move when I turned 39.  And I did, I first took control of what I was eating,  I dropped 15 pounds in a month (probably too much, too fast.)  Then I joined a gym, Bally Health and Racket Club.  It cost me a couple-hundred-dollars and being a cheapskate at heart I decided I needed to get my money's worth by going five days a week.  Over the course of a year I lost about 50 pounds, on my 30th birthday I finished a sprint triathlon at Sea World in Orlando.  I was hooked, I was running 20-30 miles a week, swimming 2 miles a week, riding bikes 100 miles per week, and lifting weights 5-6 hours per week.  Wow, I have never looked so good.  I did three seasons of triathlons,   8 running seasons including finishing two half marathons. When I was at the peak of my gym bunny days, I even made a cameo appearance in a "Ben Gay Active America Video"- someplace I have the check stub - I was paid for it something silly like $25 (I wonder if I reported that to the IRS?)

By the time I turned 39 I was in law school, I had slowed down, but was still well under 200 pounds.  Turning 49 found me even more sedentary, and the weight slowly coming back. The last two years were ugly, with mobility challenges the weight started to pile on.

Since getting back on my feet, I am glad to be back walking and riding bikes.  I have once again taken control of what I eat.  Only I can do that, it is important to me.  The middle of January the Condo complex opened our new $1.4-million dollar fitness center.  It as much needed, the old fitness space was in the locker rooms, so when I was walking on the treadmill, the saggy asses would be going back and forth in front of me going to the showers.  Nothing worth seeing!  The new space is larger, has all new equipment and has a million dollar view.  The re-do included remodeling the locker rooms and adding the space above.  The addition is on columns, over a ravine, with views of the tree filled ravine and hillside.  My commitment is to go at least four times per week, Saturday, Sunday, Tuesday and Thursday.  I started two weeks ago in the temporary fitness room, and am carrying on in the new space.  It is nice, it is starting to feel like what I should be doing, I feel strange without it.  I doubt that I will ever be back to the gym bunny days, but it would be nice to get back into the next size or two sizes smaller clothes that are still in the closet.  Actually a couple of years ago I ordered an American Giant sweatshirt.  American Giant is entirely made in the USA with a focus on top quality materials and workmanship.  It was on all kinds of top ten lists a couple of years ago. I ordered it and waited four months for it to arrive.  It is an XXL - their largest size, and it has always been too snug.  I would like to fit into it.  I don't care what the scale says, I want to be able to zip the American Giant XXL zip up sweatshirt and be comfortable.
Posted by Travel at 12:00 AM