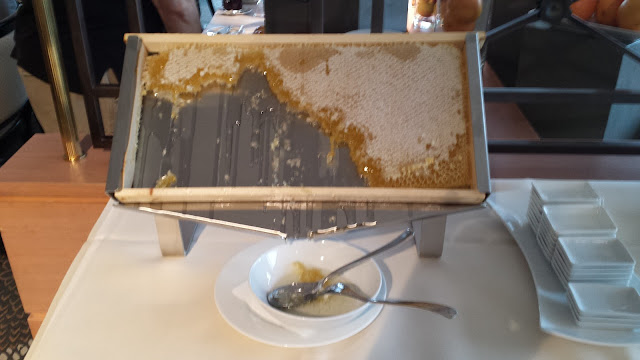 I grew up on a funny sort of a farm, my father and grandfather kept bees - lots and lots and lots of bees. When I was a teenager, I was out running errands with my grandmother one day, she stopped in a local business to pay a bill for the farm, the clerk turned around and asked the book keeper for the bill for the Honey Farm, except she said Funny Farm.  My grandmother was furious, I had a hard time containing my laughter.

I don't like bees, it is not the getting stung part that I dislike, you get use to that after a while, bees stink and they make me sneeze.  Yes you get use to getting stung, of course if you place your hand on the table and start pounding on it with a hammer, after a few minutes you will get use to it.  It will hurt just the same, but you will get use to it.  With bee stings, you do stop swelling up after a few dozen stings in a few weeks, unless you are allergic, like my grandmother was, she swelled up and had trouble breathing after just one sting.

How many bees did we have, kind of like stars in the sky, billions and billions and billions of them.  Inventory was fun, bees are kind of hard to count - they keep moving, and hatching and dying.  We shipped honey in 55 gallon barrels, by the semi truck load.  As I recall on our best year we shipped something like 250,000 pounds of honey.  Of course it sold for about 10-cents a pound back in the middle 60's when we had that once in a lifetime crop.  So what happened to the bees, none of the kids wanted to go into the business and my father sold out in 1982 a retired to Florida.

The honey comb above was on the breakfast buffet at the Graf Zeppelin Hotel in Stuttgart last summer.  A nice touch. How sweet - and it reminded me of my past.
Posted by Travel at 6:00 AM