Bumps on the Horizon 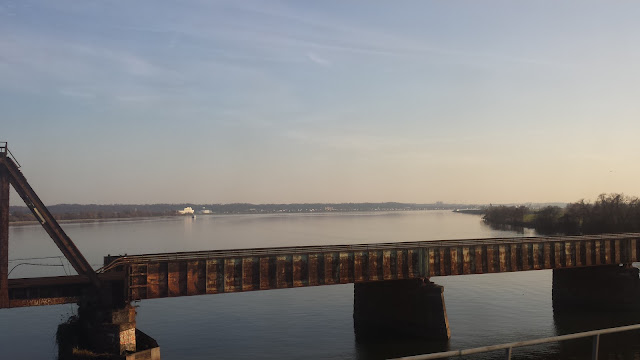 This is the Potomac River, headed outbound on the Metro (Subway) bridge toward the Pentagon.  The old railroad bridge, and it is well over 100 years old, is still in use.  Amtrak, VRE and freight passing in and out of the District to Virginia pass over it.

On the right, is Gravely Point, there is nice park there and Reagan National Airport is just beyond that.  On the left the white buildings along the water front are military, beyond that along the river is a large tan structure, that is a DC water and sewer facility.  To the right of that, sticking up is a grey bump on the eastern shore, just to the left of Gravely point, that the hotel tower under construction for a new MGM-Grand Casino.  Yes, you are going to be able to see a casino from DC.  You will really see it, the glass on the sides of the hotel tower will be giant video screens - like ten stories tall.  That will set a few people a twitter.  It is about 6 miles down river from the city.  I live just south of there, about a 1/5 miles west of the Virginia side of the river - on top of a hill.  If I was in the other building with a view to the east, I would be able to see the Casino from my terrace.
Posted by Travel at 6:00 AM