Dear Family, Friends, Readers, Lurkers, Strangers,
It is the time of the year for silly Christmas letters, sort of a year in review, and what an interesting year it has been. 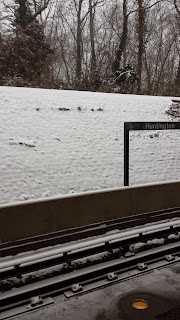 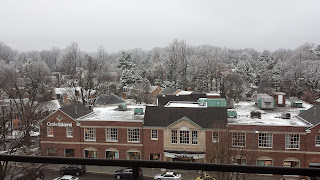 The year started off with a little winter, though not too bad.  We had little snow, but enough cold to make up for it.  The second picture is a fresh snow, from the law school at American University, I was there recruiting student interns for my office in January, and a couple of days later, I was eating sushi with a view of the Pacific just south of LA. 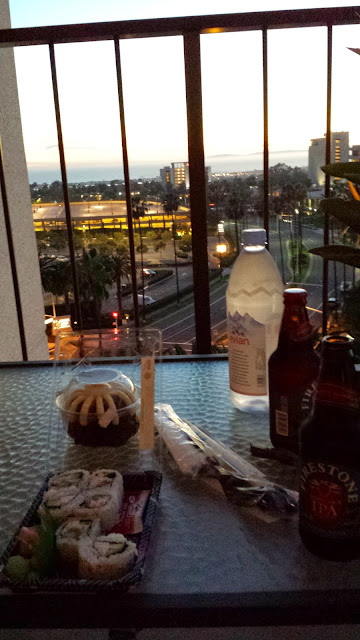 From LA, I flew to Phoenix, and  from there west to Hawaii.  It has taken me 20 years, but I finally found an opportunity to get someone to pay me to go to Hawaii.  I did a series of five workshops on legal issues in dementia, on four different islands in five days.  I had a couple of free days at the beginning.  I took a whale watching tour out of Honolulu down around Diamond Head, yes we did see whales, and I rented a convertible and drove around Oahu.  The rest of the week there was work-work-work, 12 and 14 hour days.  I left my American Express card in Waimea.  Hawaii was fantastic, I want to go back. 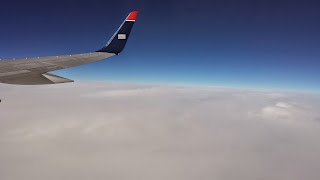 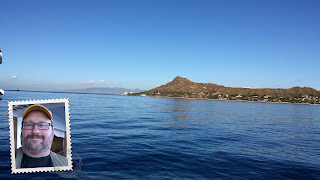 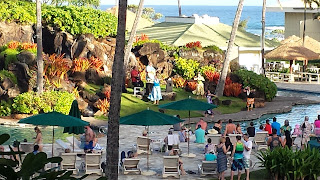 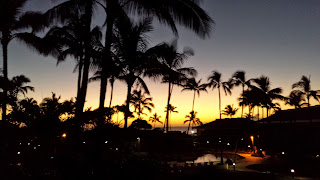 The only down side to that trip, is I was having trouble walking.  I had fallen in October of 2014, I blamed it on old worn out knees.  But in February I was still walking with a cane, and frankly having a very difficult staying upright.  I dragged myself through paradise - it was still a wonderful trip and I am so glad I had the opportunity to go.  I am now down to 2 states left to visit (Idaho and Wyoming.) 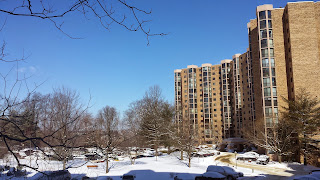 Of course, back to reality and more snow in March. 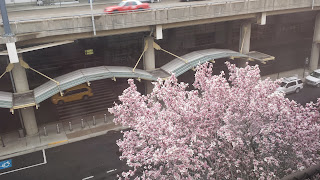 The trees bloomed early this year, this picture was taken from the Metro train on the inbound side at National Airport on April 10.  I had two more nasty falls in April, one at home and one in a Metro Station.  I finally decided to see a doctor, after all it had been 25 years since I had last seen one. 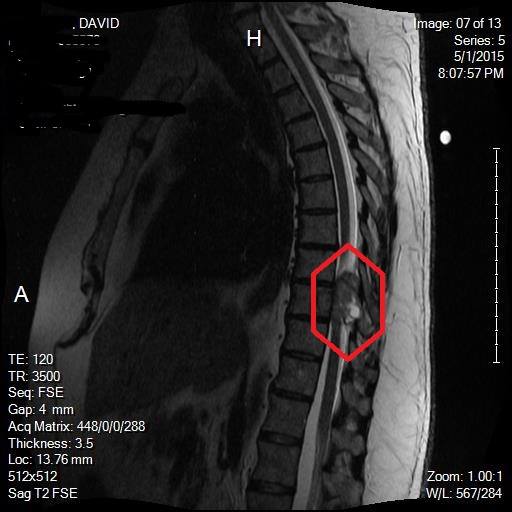 I saw the doctor on a Friday morning.  She doctor assured me is was not my knees, but something much more serious and ordered an MRI, done at 7 that evening.  By the time I got to the office on Monday my phone was ringing saying I needed to go to an emergency room and check myself in.  They said show them the MRI image and they will know why you are there.  The blob in the red diamond above is the reason, a schwannoma - a benign tumor had grown around and into my spine and was compressing my spinal cord.  That explained the falls, I was losing control of the muscles in my legs, especially my right leg and had lost about 40% of the feeling in my feet.  So began three weeks in and out of three hospitals, and 8 weeks at home recovering.  Surgery was on May 13th, and was a success.  I woke up able to move my legs and wiggle my toes. 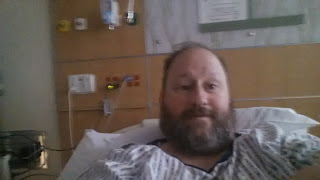 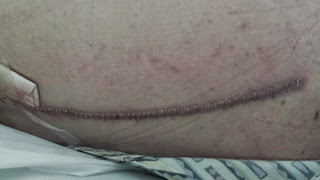 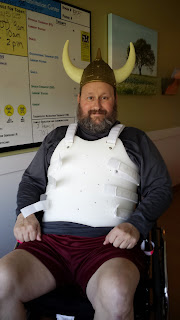 Recovery is ongoing, and was challenging at times.  The last part of the inpatient experience was a spinal rehab unit, with three hours of physical and occupational therapy every day.  My legs were quite weak, I had not really been able to walk much for 8 months before seeking help and two weeks on my back in the first two hospitals didn't help.  I wore the brace for about 8 weeks.  When I came home, I was going to outpatient physical therapy 2 hours at a shot, three times a week. By early July I was allowed to start driving, and returned to work after the 4th of July.  The handicapped parking permit was temporary and a great help.
When I was in the hospital, they would ask, what is you goal for recovery?  My answer was simple, I have airline tickets to fly to Frankfurt on August 13th, and I need to be well enough to go.  And I have reservations to ride on a Zeppelin on August 22nd and I need to be able to walk to it and climb on and off.  The Zeppelin line, usually sent them looking through the chart for medications and mental health notes.  Well I made it, here I am on the flight to Frankfurt. 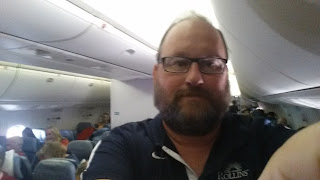 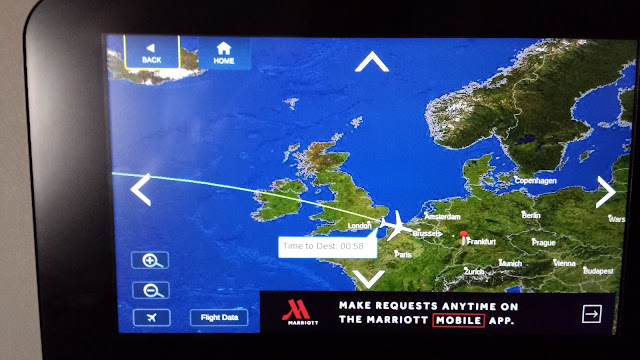 From Frankfurt, I took the train to Stuttgart and met J there.  He had been in England for a conference at Oxford the week before.  We went to the Mercedes Museum in Stuttgart.  It is an incredible collection and an amazing building. 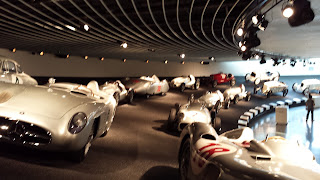 We also went by the factory and picked up our new baby.  We did factory delivery and were able to drive the car for two weeks, then have it shipped home.  It was an amazing experience - I highly recommend it. 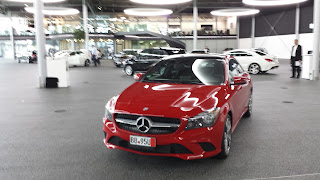 A few days into the drive we went to Friedrichshafen, on Lake Constance, where the Count tested the first Zeppelins and took a ride.  It is an amazing experience.   Click here for video https://youtu.be/dAPYHr6tzzQ 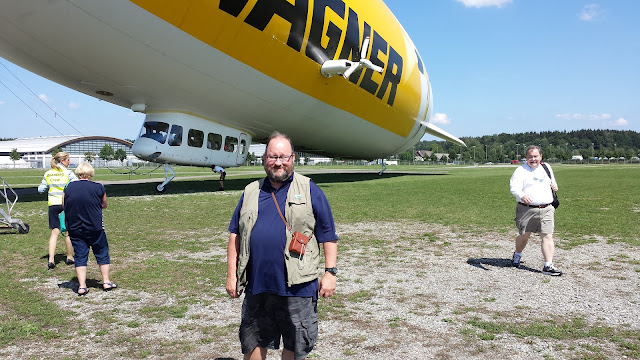 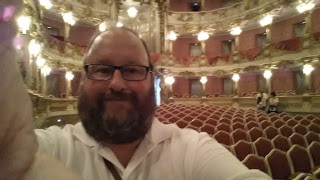 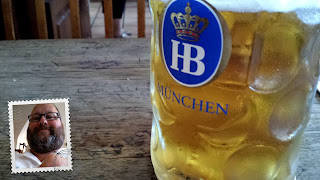 We ended our time in Germany in Munich, great city and great fun.  I only had one beer at the HB on my 57th birthday - yes it was 1-liter. 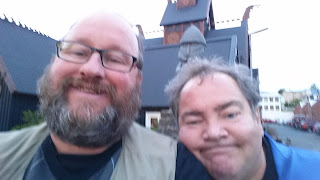 On the way home, we stopped overnight in Iceland.  Wow, a volcanic landscape in the sub arctic.  Amazing, place, people and food.  My only regret, is not enough time. 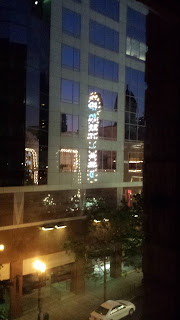 In September I was in Portland Oregon for three days for a board meeting. 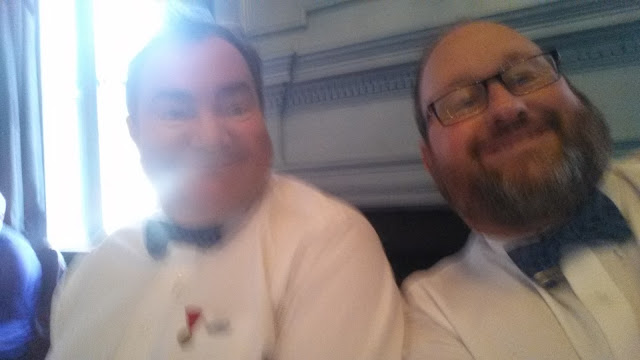 On October 17th, we got married.  The Supreme Court cleared the way this summer, so on the 23rd anniversary of our creating a home together, we got married along the waterfront in Alexandria, with 20 family and friends. 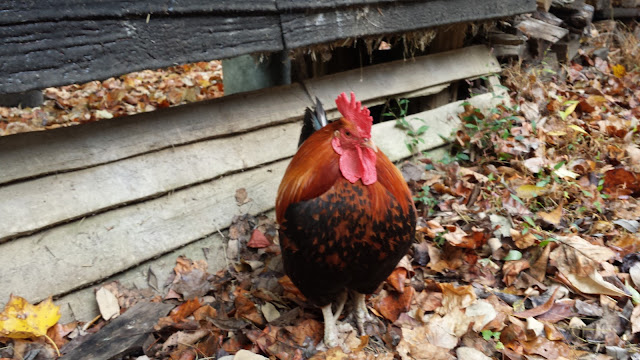 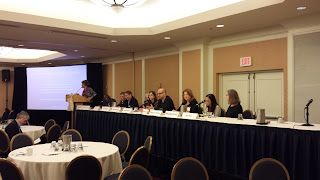 The end of October, was  the National Aging and Law Conference.  The culmination of a year of planning - and it all worked.  I am still trying to confirm a venue and dates for 2016. 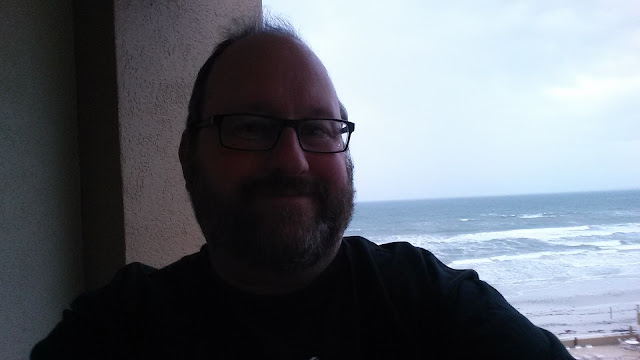 We went to Florida for Thanksgiving this year.  We spent a couple of nights at the beach in Daytona on the way down. 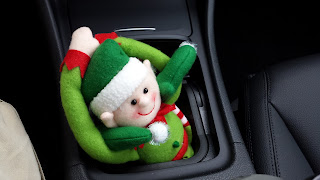 Shortly before Christmas, I took the folding cane out of my briefcase.  I haven't used on since October.  I am walking well, riding bikes and continue to rebuild strength and stamina.  There is some permanent nerve damage, but over all I am one very lucky guy. 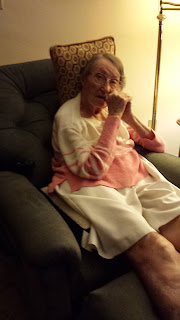 Mom, at 88 lives in her own world.  She is surrounded by family, well cared for, happy and seemingly comfortable.  She need help with ADLs, and her dementia is very advanced. 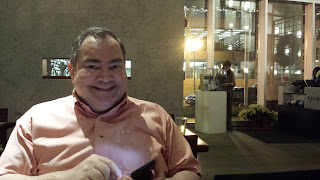 The light of my life, my husband at long last.

What will 2016 hold?  Back to California in January, Denver in April, and plans are underway for Rome the end of May.  I will make it to Florida a couple of times, and Kentucky at least once.