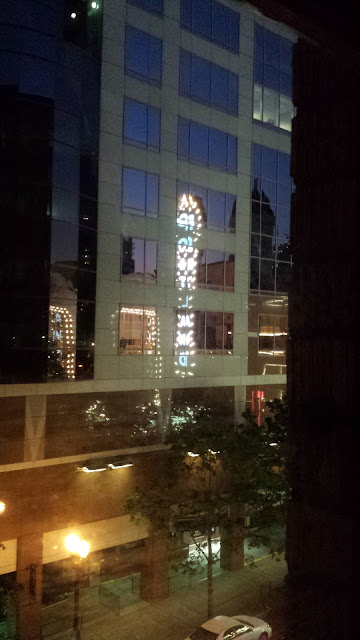 I was recently in Portland for three nights for a board meeting.  Recreational marijuana does not become legal in Oregon until October 1st.  A friend of mine, who claims to have never smelled the stuff, was disappointed by this. Being "good" citizens,  we refrain from breaking the law.  Not that the good people of Portland appeared to be least bit concerned about this.  I had a couple of free hours and took a long walk down along the river front.  The first thing that made my head spin around was the guy standing there on the sidewalk with a mason jar filled with buds.  I am naive enough to not know what to do with them, but I do know what they look like. There are a lot of street people, homeless living and sleeping on the sidewalks of Portland.  As I continued my walk along the river front, I passed what looked like half an acre of sleeping bags on the sidewalk.  At the far end were half a dozen people counting out hypodermic needles.  Not good, not healthy, I am pretty sure they were not planning their insulin use for the week.

Portland is an interesting city.  It is wild west meets hipsters, meets high end shopping.  It has a nice airport connected to the city by light rail.  This was the second time I have been there.  I would go back.
Posted by Travel at 6:00 AM