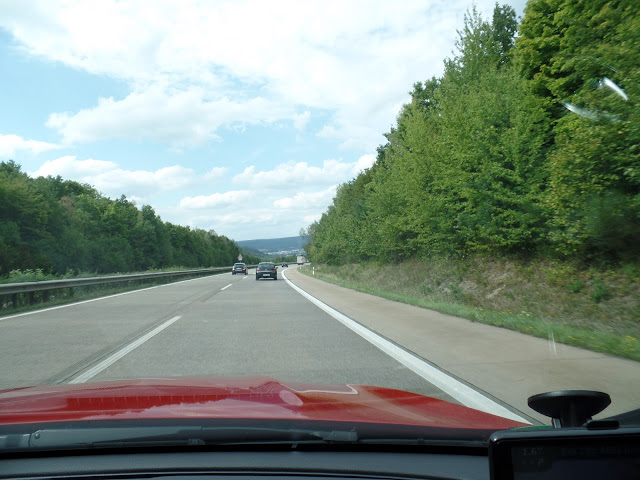 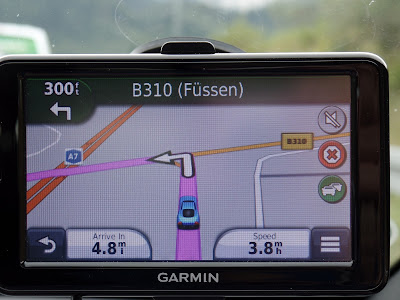 For a start, the Autobahn is not one road, it is an extensive network of expressways. I didn't know that.

There are several factors that make the Autobahn experience amazing.  The roads are very well engineered, meticulously maintained, and the drivers are well trained and disciplined.  The result is a system that is safe, fast and fun to drive.  The right lane is the slow lane and the left lane is for passing.  There is stiff fine for driving in the left lane when you are not passing.  There is a stiff fine for passing on the right.  On sections with two lanes (like the one above) there are speed limits.  Some vehicles, such as travel trailers and trucks carrying dangerous cargo have a special speed limit of 100-kps (about 62-mph.) These vehicles always travel in the right lane.  The speed limit will drop in areas with heavy traffic, unusual road conditions, or merging traffic. If there is a speed limit in the left lane, it will be higher, usually 20-kph higher than the slow lane.  The speed limits are posted electronically, and adjusted for road, weather and traffic conditions and drivers seem to obey them.

In sections with three lanes, the right lane is the slow lane, the next lane is fast and the left lane is the passing lane.  In some areas there is no posted speed limit, the speed limit is as reasonably safe.  I don't recall any unlimited sections with just two lanes, but there might me. If traffic is light, you can really open it up on the sections without a speed limit. The first time I nudged just over 100-mph, I had only once in my life driven over 100-mph before - if I had been caught way back in 1990 - I'd still be paying that fine.  The second time, I was able to play with the Audies and registered 108 mph before I ran out of road and pulled over into the middle.

You pull into the passing lane and pass. I was warned that when I pulled into fast lane the little gray dot on the horizon in the rearview mirror would be the Audi, Mercedes or Porsche 20 feet off my trunk in about 20 seconds unless I was the fastest thing on the road.  You pull out, floor it, pass and pull back over.  If faster traffic comes up behind you, you pull over.  The drivers are immensely disciplined.  In two weeks of driving we only once got stuck behind a truck trying and failing to pass another truck going up hill (he must have been trained to drive by Walmart.)  We saw a lot of RVs on the road, and never once got trapped behind one trying to pass in the fast lane.  The discipline of the drivers is a big part of what makes this system safe.

So is it perfect, no. Many of the entrance and exits ramps are very tight turns requiring you to slow to 25 mph.  The construction or work zones have impossibly narrow lanes.  There is the occasional driver in an underpowered car who tries unsuccessfully to play in the fast lane, and there are drivers who are "not from around here."  The Autobahn system is many-many roads.  They don't always connect well to one another, it was not uncommon to have to get off of the Autobahn and drive for 2-5 miles on back roads, to get onto the next Autobahn.  Why? I don't know.

I can attest to two things, the Mercedes CLA-250 will go over 100 miles-per-hour, and it has very-very good brakes - thankfully - but that is another story!
Posted by Travel at 6:00 AM