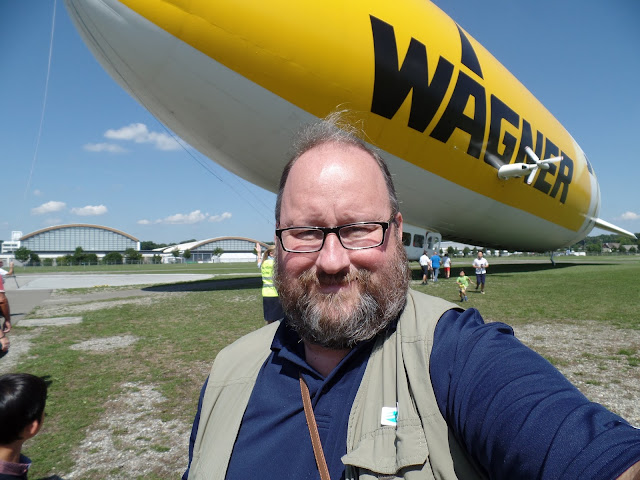 I love flying!  I grew up around little airplanes and little airports and I have long enjoyed flying.  I have flown on about everything imaginable, a Piper J-3 Cub, modern single engine fixed wing, about every airliner in the air, a helicopter, and a couple of float planes.  I am missing a hot air balloon, and I missed the opportunity to go faster then the speed of sound.  The other missing check on the aircraft list, was an airship.  It is nearly impossible to get a ride on a Goodyear Blimp, rides are limited to major customers, dealers, suppliers, people with political or business connections.  I have tried, and never been able to snag that ride.  Zeppelin is now building new airships for Goodyear, the first one is already in service in North America and the second one is being shipped - the passenger cabin was sitting in a huge crate at the airport in Friedrichshafen.

When we started planing the trip to Germany, Jay sent me a link for exotic aircraft rides, he thought I would be enthralled with a ride in a Junkers Tri-Motor, but I was instantly smitten with the idea of a Zeppelin Ride. This is one of only a handful of places in the world (it may be the only one currently in operation) where you can make a reservation, pay the fare and away you go.  I made reservations as soon as I had the schedule to the point that I knew I could work around the ride. 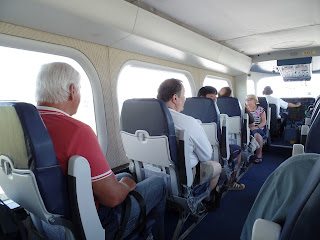 You arrive an hour before flight time and check in.  About 30 minutes before flight time you go to a safety briefing, they did a special briefing for we English speakers.  Then board a van for a short ride out to the landing/loading zone.  The airship blows in the wind, you are warned to stay alert and asked to not take any pictures while boarding to avoid being bumped over by a blimp.

Inside there are 12 comfortable seats, six on each side with a comfortable aisle up the middle, every seat is a window seat.  When they release the craft from it's mooring it starts to float up, the engines and propellers start to control the direction of flight and you are off.  It is kind of magic. Once you are 500 feet in the air, they encourage you to take off your seatbelt and walk around the cabin.  It is a very gentle ride.  Two windows open to make taking pictures easier, you are cautioned to please not drop you camera out the window.


What an adventure!
Posted by Travel at 6:00 AM