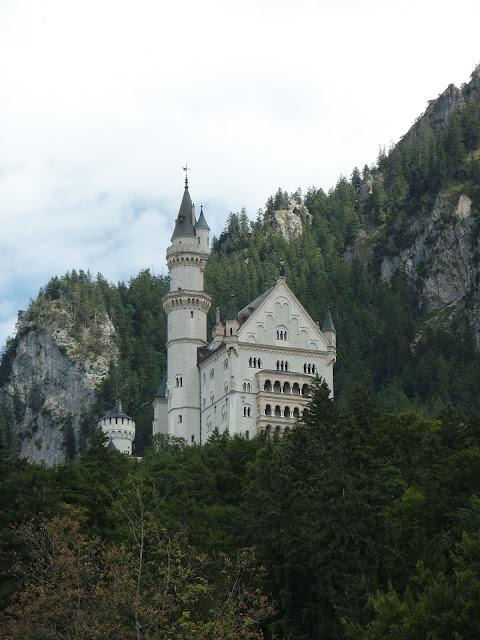 We have all seen pictures of Mad King Ludwig's Neuschwanstein Castle. Legend has it that this was the inspiration for Walt Disney when he designed Cinderella's Castle for Disneyland and Disney World.  We were going to be close, a visit was on the not to be missed list.

We were there in the peak of tourist season, and the last five miles of the road the Castle were bumper to bumper, the last 5 miles took about half an hour to drive.  The parking was somewhat distant and not the best organized.  The signs directed us to the ticket office and an abrupt realization, we were there in the peak of tourist season, tickets for tours of the inside were sold out until early evening, and it was just before noon when we arrived.  Opps!  I should have gone online and bought tickets.  But you can still see the outside.  We walked farther up the road and waited in line for the horse drawn wagons, then when we realized that wait was over an hour.  We went in search of the line of for the bus and found it just as long.  At this point I had been on my feet for over an hour, much of it going up and down hills.  I looked at the restaurants, looked at Jay, he looked at me, and we went to lunch.  We talked about it and decided we had good pictures of the outside and neither of really wanted to climb the mountain, and I was not up to the long wait for the bus.  We baled and headed for the car.  When I came out of the car park, I turned in the opposite direction of most of the traffic and found a delightful tree lined country road, with the most spectacular views of the Castle and nearly no traffic.  I turned Ms Garmin on and she started to sort out a route, a route without all of the tourist traffic.

So Neuschwanstein, been there, took the pictures, bought the souvenirs and survived.
Posted by Travel at 6:00 AM