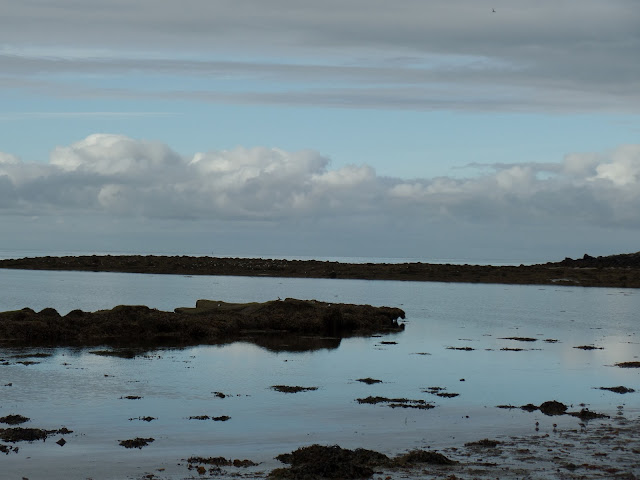 Near the lighthouse point at the south end of Reykjavik 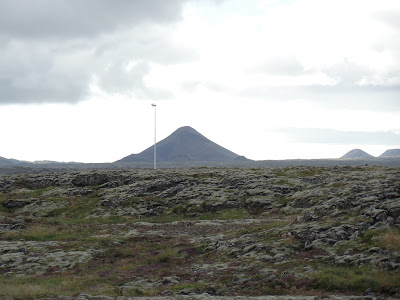 A volcano in the distance, on the way to the airport (the road the airport has street lights all 29 miles.) 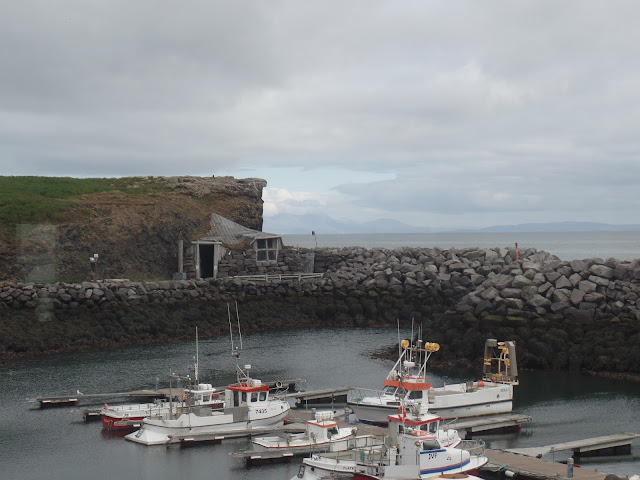 The view from lunch in Keflavik, a small harbor town, about 3 miles from the international airport. 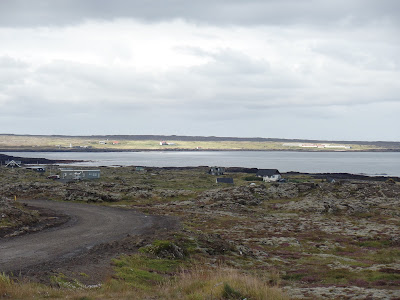 A view of the coast line between Reykjavik and Keflavick

On the way back from Germany, we stopped over in Iceland.  If you live in a city that Iceland Air or one of their partner airlines flies to, they make it easy.  There is no extra charge on airfare for up to a 7 night stop over.  From there it gets a little expensive - but worth it in many ways.

Iceland is an active volcanic island, in the north Atlantic.  A rare volcanic landscape in the tundra.  The population of the country is about 323,000, with 300,000 of those in the greater Reykjavik area. The sea dominates life in Iceland, for centuries they have fished and served as a stopping point in the north Atlantic.  The island looks small on the map, it is fact a little over 39,000 square miles.  Largely because of narrow and unpaved roads, the estimated time to drive around the circumference of the island is four - five days.

The international airport is not in Reykjavik, but in Keflavik, about 30 miles east of Reykjavik.  There is an express bus that runs from the airport into the city.  I rented a car.  The car rental was about $65 for 24 hours, gas is somewhat expensive, we drove about 100 miles and topping off the rental car with gas cost me a little over $20.

We stayed at a hotel in Hafnarfjordur, about 3/4 of the way from the airport into Reykjavik.
http://www.hotelhafnarfjordur.is/Location/
I booked ahead, we were still in the high season and the room cost about $155 and included breakfast.  The room was large, clean, comfortable and had a small kitchenette.  Downtown hotels, and recognized international brands were twice the price.

The majority of the island's energy needs are met with geothermal from the volcanoes.  They use geothermal to generate electricity, heat homes and business and to heat greenhouse.  Other than fish, and produce grown on the island everything has to be imported, and things are a little expensive.  A nice dinner for the two of us, was about $120 (not beyond the pale of DC prices.)  Lunch the next day in Keflavik with carrot cake for dessert was $55 for the two of us. Again you can pay that in a big world city - but not a bargain in a small harbor town along the coast.

Was it worth it? You bet.  It was an amazing landscape.  My only regret is that I didn't schedule two nights - there is a lot of sightseeing within a day's drive of Reykjavik that we simply didn't have time for.

A word of caution, the airport has a very-very busy afternoon hub time. The wait at security at 3:00 was 45 minutes.  The airport is being remodeled and expanded and is a bit of a mess.  It is also poorly signed and the staff not at all helpful with directions.  There is no seating in the departure areas, you stand in line to board, lines that form 30-45 minutes before boarding time (not a good system.)  There is no pre-boarding for anyone, first class or persons with disabilities stand in line with everyone else.  Sounds good, unless you have difficulty standing for 40 minutes, by the time we boarded I could barely climb the stairs (most gates do not have jetways.)  (The guy in the wheelchair who came in our flight and was leaving on another flight was having a very difficult time navigating the airport.)
Posted by Travel at 6:00 AM