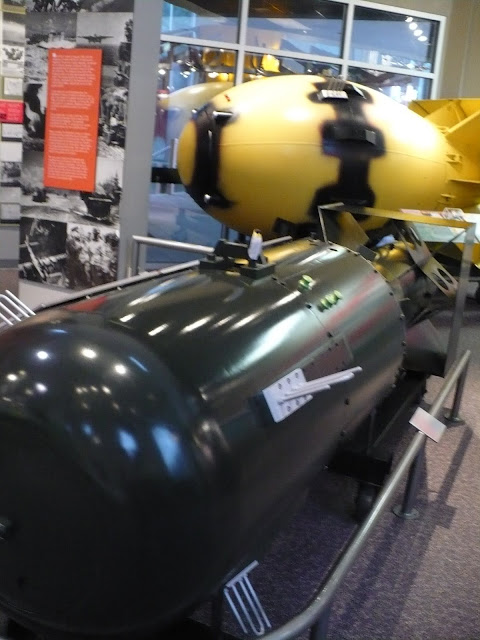 I have a new collaborator on a work project who lives in New Mexico. I have been to New Mexico a few times as a child, once as an adult.  I did a some training in Albuquerque a decade ago.  I added a couple of days to that trip and did a little touring.  I started to spend the day in Santa Fe, it was massively crowded, parking was impossible, and it was raining, so I got out of town.  I drove north, looked at the GPS and realized I was near Las Alamos.  Los Alamos was home the Manhattan project, the super secret project to develop nuclear bombs during World War II.  Why not?

There is a nice small museum there, the photo above are replicas of the two original devices, Little Boy and Fat Man. The gravity of what happened there is overwhelming.  I drove through the National Laboratory grounds,  a weird experience that requires permission from the guard and instructions to not stop unless and until the police pull up behind you.  There is a national park with remains of cliff dwellings on the other side that I went to see.

I would like to go back to New Mexico, I think I will avoid Las Alamos the next trip.  Too weird in ways that are hard to explain.