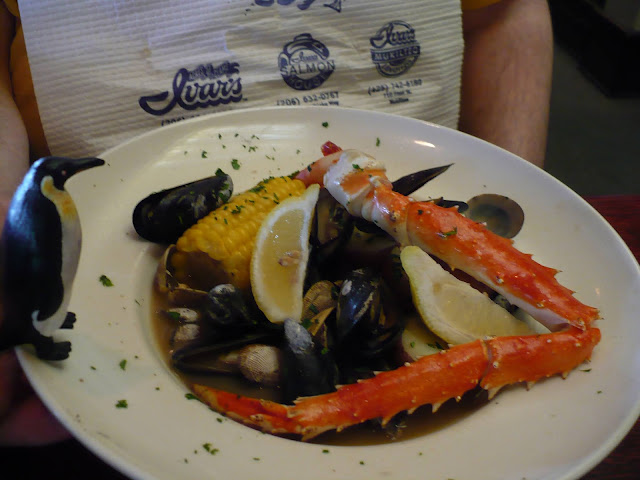 A posting from Spo the dear a couple of weeks ago mentioned foods he had not eaten, and inspired me to write about some of the unusual, exotic or forbidden foods I have tried.  Some of these were intentional, some just a chance opportunity.

Whale. Iceland has a special limited permit to fish for whale as a traditional cultural food. There are a few restaurants that offer it.  When we did a 24 hour stopover in Iceland, I went out of my way to go to one.  It is a dark red meat, kind of like beef.  I am glad I tried it, I wouldn't go out of my way to do it again.

Seal.  First Nation peoples, (native groups) in Canada are allowed hunting rights for seals.  There are a few restaurants operated by First Nations people, who are allowed to serve these traditional cultural foods.  There is a restaurant in Toronto that serves seal.  It is dark, rich, a little dry.  The food and service were wonderful, and yes I would go back.

Forbidden Cheddar. When I mentioned I was working on this list, Jay reminded me of the forbidden cheddar.  Trader Joes carried an aged New York Cheddar Cheese that was rather strong, right on the edge of starting to mold.  I loved it, he hated it, at one point I was forbidden from buying it. The compromise was if I bought it, I had to buy something a little milder.  Then TJs stopped carrying it.  Sad that.

Reindeer. I am not sure which category this one fits into.  There are vendor carts on the streets of Anchorage Alaska in the summer that specialize in Reindeer sausages on a bun like a hotdog.  The vendor was a native Alaskan.  I don't know if hunting is limited to natives or not.  The vendor was wearing a wonderful T-shirt, he should have been selling them, that read, "Vegetarian is an old Eskimo word for Bad Hunter." It was good, slightly spicy, yes I will again when the opportunity presents itself.

Elk.  I was in Montana to do training on elder abuse about 15 years ago, we stopped for dinner and elk burgers were on the menu, so I ordered one.  My dining companion was grossed out.  It was good.  The following day I had a bowl of elk chilli for lunch on an Indian Reservation (my traveling companion was sure I would die from it.)  I made the mistake in Texas of ordering an elk steak (farm raised,) it was indelibly tough.  Much better as a stew or ground meat.  And yes I will again.

Buffalo.  99 out of 100 days we can buy farm raised buffalo in our local grocery store.  I first found it in Kentucky, raised on farms there in the state.  It is good, lean, again it is a better ground or stewed.  As a steak, it needs to rather rare, or it gets very tough. Cook it the same as you would beef.

Snails.  Snails are a great excuse to devour garlic and butter. They are slightly chewy, kind of like a mussel (in essence they are a land-dwelling shellfish.)  Best with a view of the Eiffel Tower.  I have and I intend to do so again.

Venison. My father was not a deer hunter, but he had friends who were, so version would show up from time to time. Occasionally you find it on restaurant menus.  It is okay, I don't find it to be special.

Pheasant. My father and grandfather hunted small birds.  So pheasant was served sometimes in the fall.  I have found it on restaurant menus. They are difficult birds to farm. Tasty, yes if it is available (I can buy it at the local gourmet market but it about $30 a pound.)

Rabbit.  My grandfather was an enthusiastic hunter, and my father ate so much rabbit as a kid, he really didn't want it again.  The first time for me was at a restaurant called the Garlic Rose in San Francisco, roasted with plenty of garlic, it was heavenly.  The next time was in Florence Italy, stewed in a pasta sauce, served over handmade paperedeli (a wide flat pasta) it was heavenly. One little caveat, traditionally prepared, the entire rabbit is slow cooked, bones and all, until it gives up all of the flavor and goodness.  The smaller bones, often end up in the sauce (I was warned, and it was worth watching out for the bones.) I could buy rabbit locally, I have never cooked it and for some strange reason I am intimidated by it.

I have prepared about every variety of vegetable you can imagine.  I am not a big fan of cooked greens. Rutabagas are a running joke in our house, edible, but why bother? Jay fixes them a few times a year. Turnips, parsnips, are easy and tasty.  I stump the cashiers at the grocery store with things like rhubarb.

What is the most exotic thing you have eaten?