The Way We Were Wednesday - Tom and Arlene 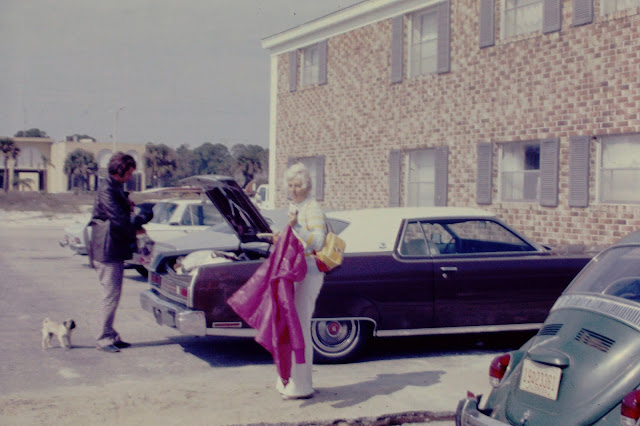 A flashback to the mid 1970's here.  My family spent a couple of winters in a condominium on the east coast of Florida, before my parents bought the house they would live the rest of their lives in. Tom and Arlene owned a condo in the same community.  They were from Michigan, so there was some connection.  Tom was a very talented bricklayer and a prince of guy. Arlene was, well there is no easier way to put it, a little bit nuts.

They would come to Florida in the winter when construction was slow in Michigan.

One winter a tire on their car went flat, it was defective in manufacturer.  She was so angry at the tire dealer that she had bought it from that she put the spare on, drove to Orlando, checked the tire as baggage, flew to Michigan, so she could go scream at the tire dealer about it.  He agreed it was defective, asked where the car was so he could replace it.  When she said, Florida, he said, let me arrange a replacement, take it to the dealer just up the street from your condo, they will replace it for free. She flew back to Florida the same day.

Tom and their two kids showed up at my parents house one afternoon, Arlene was mad, so she had changed the locks and wouldn't let him in.  The next day, she was calling wanting to know if he was ever going to come home.

She was convinced her father was hiding cash in his house.  When he died she busted up the walls in his house looking for it.  All she found was an empty whiskey bottle and a couple of dead mice.

Like I say, she was a little crazy. We all need a little nuts in our lives.