Travel Tuesday - Randomness lands me in 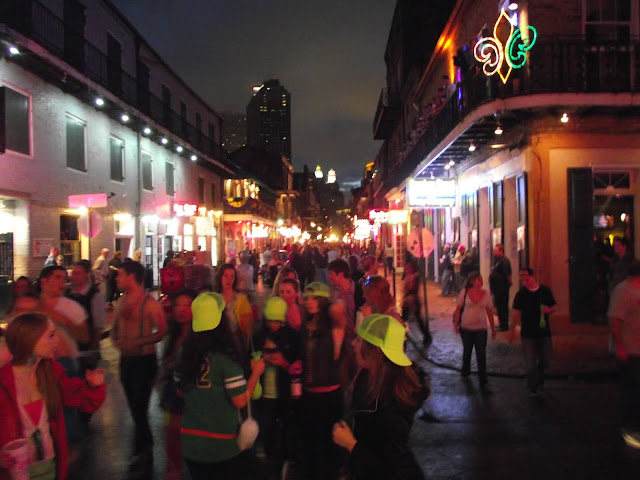 New Orleans.  I had no idea where to go with this one, so I called up the unsorted photo file, spun the mouse, and landed in New Orleans one February, just at the start of the Mardi Gras season, a slightly blurry random street scene in the French Quarter.  I have been to New Orleans several times, the first time in the 1980's when it hosted a World's Fair. I drove there in an almost new Renault LeCar.  Renault had bought an interest in American Motors, and tried selling Euro cars in the US for a few years.  It was great fun to drive, the first car I had with a sunroof, a booming stereo, and the coldest air conditioning of any car I have ever owned.  Ice would form on the vents on the dash.

I have been back to New Orleans several times for conferences or meetings.  A city of great food, strong drinks, and a love of life.  It is also a city that struggles with poverty, and racism.  Even after all of these years.

To some extent, New Orleans being a party town is responsible for Bourbon developing as a unique style of whisky.  The demand for whisky in New Orleans outstripped the supply, and corn whisky from Bourbon county Kentucky was sealed in barrels and shipped down the Kentucky River, to the Ohio River, then west to the Mississippi river, then floated south to New Orleans.  By the time it arrived in New Orleans it had mellowed, taking on color and flavor from the charred oak barrels. The barrels were charred because they had previously been used to store salted fish, and pickled vegetables.  The melow brown whisky from Bourbon county was a hit, and orders for more flowed back up stream.  The rest is drinking history.