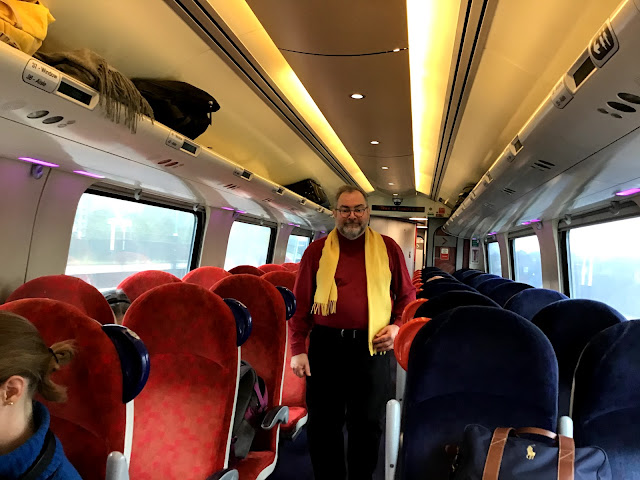 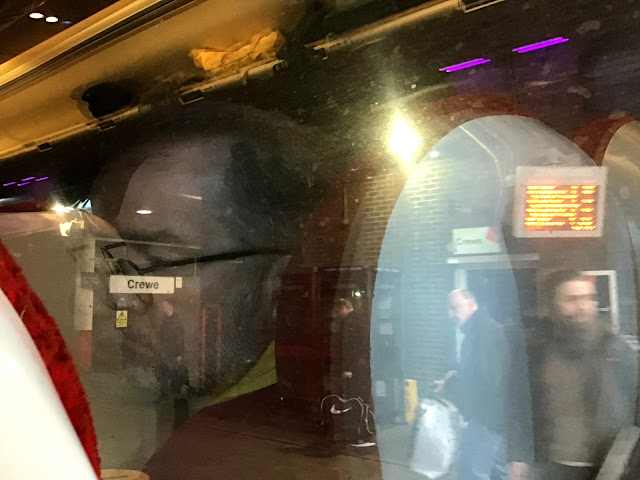 John over at Going Gently spent last weekend in London visiting friends.  He usually takes the train from near his home to London, that reminded me of a story I have not told.  When we visited John, just as Covid was taking hold in March of 2020, we took the train from Llandudno Junction to London.

It is a delightful ride across the English countryside, with stops in various places.  We boarded, settled into our seats, and four women sat opposite us, in seats facing one another with a table between them.  A delightful arrangement for four people traveling together, a strange arrangement if you are seated with three strangers, no two of the four of whom speak the same language (been there, done that, in Germany.)

Two of the women were a little past middle age, now my concept of middle age is the middle of life, so think 40, not 50.  Two were a little younger, probably early 30's.  All were trying hard to look like they were in there mid 20's and ready to party, not ready for an afternoon nap. It was a morning train,  like 9 AM, and the four of them were drinking champagne when we settled into our seats.  It became obvious they were headed into London for a "Girls Weekend Out!" They were trying to party like it was 1999.  The conversation ranged from dumping useless boyfriends, to trying to find better jobs, to what bars to hit up first, and what a cute ass the guy pushing the catering trolly on the train had.  One of them would pull a discrete bottle from her bag and top up everyone's drink.  On an airliner they stewards would have cut them off, but they kept ordering, kept drinking, by the time we got to London they just sort of flowed off the train and into the city.

While we were there, London was starting to go into lock-down.  Warnings were up to keep your distance, the couple of times we rode the tube, people were standing away from one another. Within a week the theater, bars and restaurants were all closed.

Little did they know, little did I know, that their party weekend in London, was likely the last one for a long while.  I hope they enjoyed it.  I hope they survived it.  I hope they remembered it.  Maybe sometime soon the four of them can get back on the train, pinch the trolly man on the behind and go misbehave again.  In some way, isn't that what we all want to do?