The Way We Were Wednesday - Richard's House on the Lake 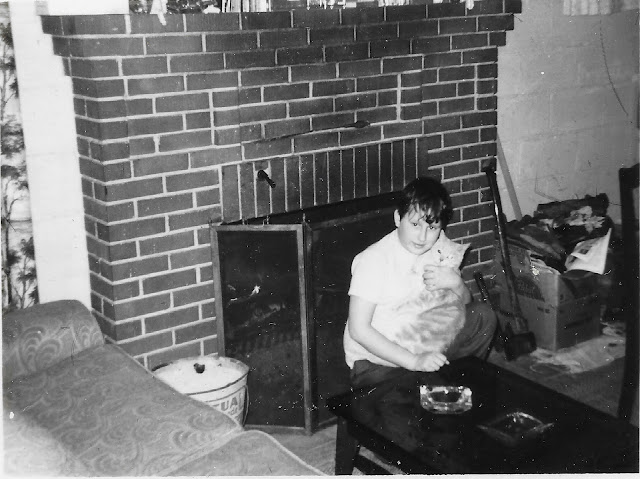 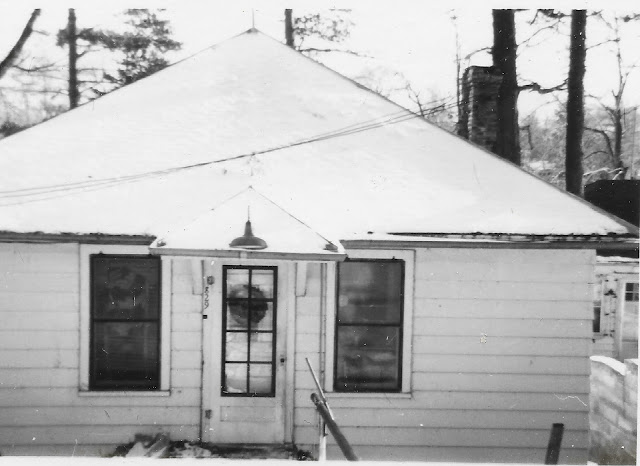 These photos were taken around New Year's in 1969 or 1970.  Me in front of fireplace on the lower level of uncle Richard's lake house, holding our house cat, and the road side of the house looking down from the parking spaces.  The house was built into a steep hill, the road side was probably 50 feet higher than the lake level. What you see here is the road side (there was a years long debate if this was the front, or if the proper front was the side facing the lake) and all you see here is the upper level.  The lower level, opened on the lake side onto a terrace, with another flight of steps down the front lawn and onto the lake level.
Richard, Dick as everyone called him, bought a house on a lake, because he had a boat. The boat came first, his mother's neighbor won it on "The Price is Right" it was delivered to her front yard and she had no idea what to do with it, so Dick bought it.  Then he needed a place for it, so he bought a house on a lake, then he met my Aunt Edith.
The upper level had two bedrooms, one bath, a tiny kitchen, and a living room across the lake side with windows entirely lining three walls.  It was a delightful sun filled room with peaceful views of the lake.  The lower level had two more bedrooms, another bath, a second larger kitchen, and a large living area with the fireplace.
We were there, and our cat was there, because there had been a massive ice storm, and the farm was without electric power for nearly two weeks.
I spent 2 to 4 weeks most summers for about a decade at the lake.  I loved it. They added a row boat that I could play in, and in later years I was allowed out alone with the power boat.  I loved the boats and the water, I have an unfullfilled desire to own a boat.
Posted by Travel at 12:00 AM