The Way We Were Wednesday - Uncle Ben 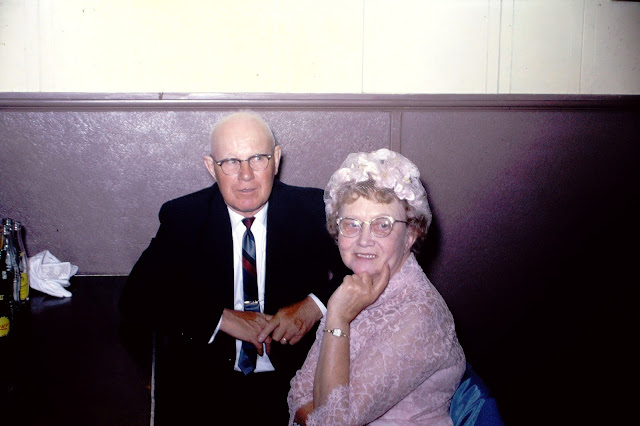 There was a string of Ben's in the family, stretching back to the late 1700's.  At least in the parts of the family that I know about, my great Uncle Ben was the last.  This picture was taken at Aunt Edith's wedding.  This is his second wife Alma.  I never knew what happened to his first wife until after my father died, and I dug through the family archive. She had appendicitis, in the 1930's, and died of a post-op infection.  He and Alma never had any children.  My father was kind of a surrogate son for him.  Ben spent his life working for Dodge. He was frugal, and conservative.  He was a dedicated church goer, who lived his faith.  He was kind, loving, peaceful.
When he bought a new car, about once every decade, he kept the old one.  If it was raining, or there was snow on the ground, the new car, stayed in the garage, and he drove the old one.  Alma never learned to drive.  When my oldest brother learned to drive, Ben decided keeping two cars was not sensible, and the old Dodge was sold to my father for my brother to drive.  A couple of years later, Ben died of an intestinal blockage, and Alma sold the newer Dodge to my father.  That is the car my middle brother rolled end over end landing in the flower bed in front of a neighbors house - he walked home - got a ticket for leaving the scene of an accident.  The car was totaled.  How do you go end over end, you get going about 90 miles an hour, slide, hit a steel post that catapults the car into the air.
My grandfather was one of many sons.  During prohibition the family was living in a second story flat near Tiger Stadium in Detroit (my grandfather was a lifelong baseball fan.) Ben was holding bible study in the living room, while his mischievous brothers were running a speakeasy and poker table in the kitchen. The house next door was raided by the police, and the "working girls" were climbing out a window, and across into the kitchen window where the game was going on.  They hid the cards, and the booze, the girls joined Ben in the Bible study, the police looked around and left. In a pinch, always  look respectable.
Posted by Travel at 12:00 AM