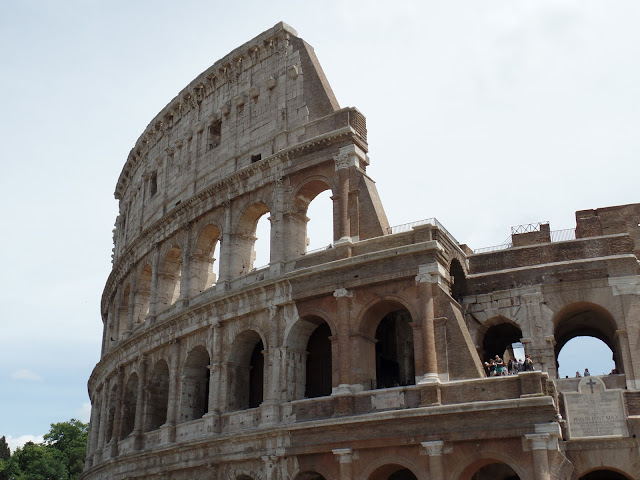 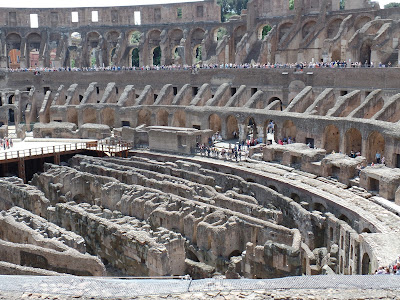 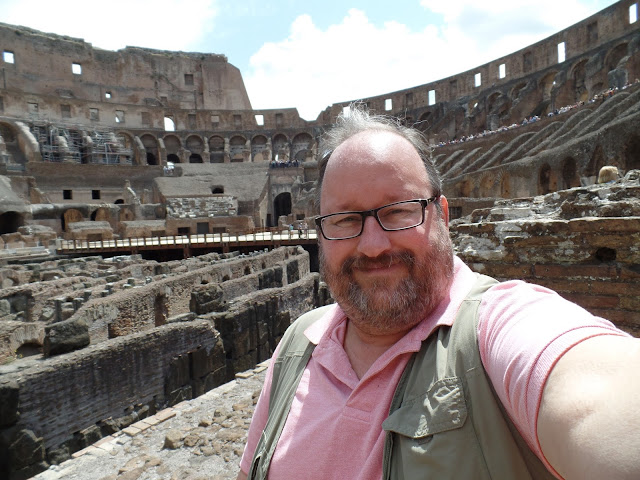 
When you see an image of the Colosseum, you think of Rome, when you think of Rome, one of the first images to come to mind is likely to be the Colosseum.  Paris has the Eiffel Tower, London has Big Ben, Washington DC has the Washington Monument.  The Colosseum kind of beats them all, it has been there for a couple-of-thousand years. I had seen the outside of it, but I had never been inside.  It was on my very short list of "must do's" for this trip.  J was tied up in a conference for two days (the conference was the reason for the trip) and he had been there - done that.  So I went solo.) I avoided the tour touts outside and got in line for tickets.  The line moved along well, you clear security with X-ray and metal detectors and then buy tickets.  The base ticket includes the forum and Palatine Hill and is good for two consecutive days.  The line moved along well and took less than 30 minutes.  There was a family of 6 from England in front of me, the teenage daughter started quoting "Lions and Tigers and Bears, oh my" from the Wizard of Oz, a mixed reference to the ancient entertainment in the Colosseum, her father muttered something about not wanting to be related to her.  I thought it was funny.

The Colosseum was packed, maneuvering around the guided tours clogging up the narrow passageways was a bit of a challenge.  I am really good at saying "scuzzee!" and muscling my way through.  There are two levels open, there are very steep steps, and two handicap accessible elevators at one end.  A lot of steep stairs present a significant challenge for me, so I headed for the elevator prepared to argue that yes I needed to use the elevator.  Something I learned a long time ago, is never ask an Italian about their health, unless you want to hear all the details, I was ready to unload the details about my spinal tumor and rebuilding my spine.  I pushed the red button for access to the elevators, and the gate opened.  I was ready for an argument that didn't need to take place.  The upper level is really a mid-level.  It offers a different perspective and was well worth the time.  There are guided tours of a higher level, and another that goes into the labyrinth below the floor level.  If you are interested in those, you should book ahead (online.)

What did I think, it is a massive icon of world history.  It is a model of sports arenas for decades to come, right down the emperor's box (modern luxury sky boxes.)  I am glad I did it, now I have been there done that, bought the T-shirt.  There are other sights to see the next time (in other words, I wouldn't bother going back for a second visit inside.) 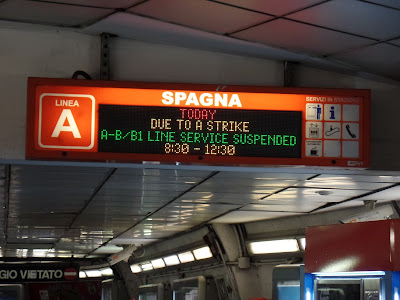 Oh, and Rome will always find a way to throw a monkey wrench into your plans, Rome has been disrupting visitors plans for centuries.  I had planned to take the subway across town to the Colosseum, the gates were closed and this sign was up.  No problem, a 10-euro taxi ride put me right where I wanted to be.  In Rome, always have a plan B.
Posted by Travel at 12:00 AM