Greetings from the Hotel Grande Italia 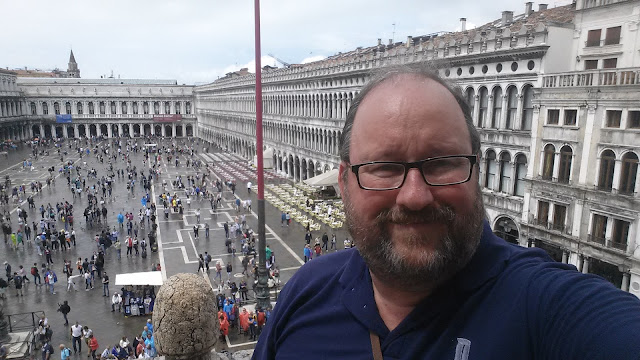 We have finished two days in Venice, been there, walked that, bought the funny hat.  I rather enjoyed it.  When I was in Florida I worked for developers and builders, we worked on some kind of low and wet sites, okay we paved over some swamps, but nothing like Venice.  Oh myyyy!  The city moves at it's own pace and has for 1,000 years.  It is amazing.  Don't be fooled by that mirage in Las Vegas, Venice is nothing like the Venetian. The winding streets hold a 1,000 surprises, the canals truly are the main - streets of the city.  The Palace and Basilica are spectacular. There will be a few postings over coming months, including a couple of forbidden photos.  In Italy you have to learn the difference between no-flash and no-photo - these were taken in no-photo zones. (Sometimes you just have to break the rules, color outside the lines, take a walk on the wild side.)

We have been staying at the Hotel Grande Italia in Padova, about a 27 minute train ride from Venice.  The name of the hotel and the location - directly across from the railroad station nearly kept me from booking. The name sounds like a movie title, or murder mystery. But it had good reviews, air-conditioning, and an elevator (actually 2 of them.) It is quite nice, it is modern interior in and old building.  The room is spacious even by American standards, neat and modern.  Breakfast is included (Hotels.com - said it was not.) and is good.  The surrounding neighborhood, is marginal - as areas around train stations often are.   Maybe it will inspire me to write a mystery.  (The apartment in Rome as a #20 Gregoriano - another address that could title a good mystery.)
Posted by Travel at 3:35 PM