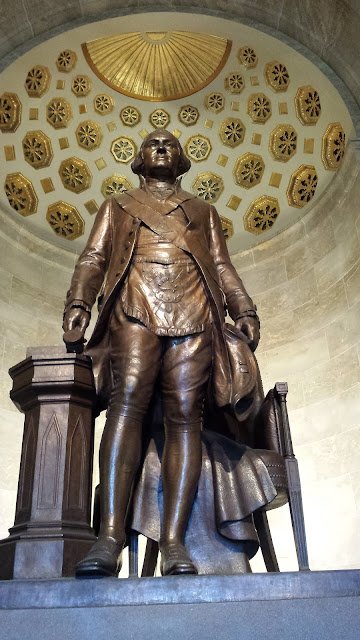 I went to Starbucks near my office to grab a bottle of water.  I looked in and there was only one customer at the counter and 4 people employed behind the counter. I should be in and out in a minute, or maybe not - this is Starbucks after all, not the most refined service delivery system.  I picked a bottle up and stepped the cash register and waited,  The young man working the register seemed to be frozen in fear, he consulted with all three of his colleagues, and did nothing.  The reason, the customer in front of me had handed him a $100 bill.  He didn't know what to do, and none of his colleagues seemed to understand why he was standing there like a deer in the headlights.  He didn't have enough change in the drawer to give change for the $100 bill.  No one seemed to know what to do, they comped her order and gave her back the $100 bill.  In the mean time I have stood there for five minutes, with no one acknowledging my presence.  I paid for my $2 bottle of water and left.  The issue was they had to many people employed, and no one working.  I wanted to scream, THE MOST IMPORTANT PERSON IN A RETAIL BUSINESS, IS THE PERSON STANDING THERE TRYING TO PAY FOR YOUR PRODUCT.  I would have been rude if I had said it, I can get ugly when I am angry.  Retail is all about service - and that requires putting the person across the counter first.

My home phone rang, yes I still have a landline at home.  It comes in handy for long calls.  Sorry, but my smart phone is really terrible at being a phone.  It is hard to hear, hard to hold.  So I make the mistake of answering my phone.  They are calling on behalf of a home cleaning service.  I ask, "do I have an existing business relationship with the business you are calling for?"  Her answer is "you must have."  I ask her to explain to me who the business is and when I have done business with them, to which she says "you are asking to many questions.  Okay!  I continue, that my number is on the Federal No Call list and if she can't tell me about the existing business relationship she is calling in violation of Federal law.  She does not like that, it gets worse, she tells me I am lying, if my name was on the do not call list she would not be calling.  I demand to know who she is and who she works for and she hangs up.  I am not George Washington, but I don't like being called a lair. I am a lawyer - not a liar.  I should sue!

Some silly study announced this week says that the Washington Metropolitan Transit System is the best in the country.  The story was just below the article about the teenage wanna be thugs shooting someone on a subway platform the day before.  Most likely the victim refused to pay for drugs.  Interestingly on my way home that day the attitude of the train operator seemed to be buoyed news - the news about being the best in the nation, not the news about the shooting.  He was very perky in his announcements and thanked us at the end of the line for riding the Number One Public Transit system in America.  God, I wonder what the worst public transit system is like.