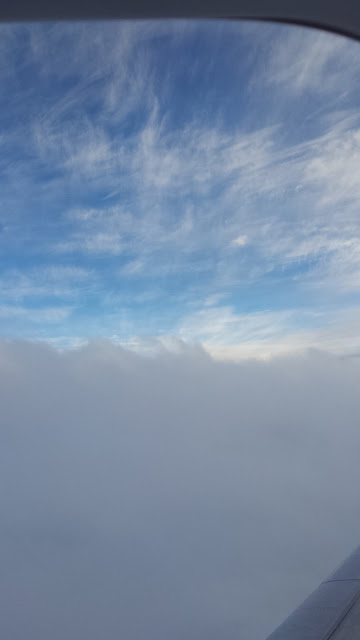 Icky weather last Friday evening as I was trying to get home to DC from Cincinnati. My phone started ringing in the middle of the closing conference and I silenced it, after the meeting I picked up the message and found that it had been the airline letting me know that my 7:30 PM flight had been canceled and wanting to know if I could board a plane in 20 minutes (I couldn't I was nearly an hour from the airport.) Next was an email saying that I was going home the next day.  I called, they rebooked me with a connection in Philadelphia (Hi Anne Marie!) going home that evening.

It rained some more and the flight to Philadelphia was delayed, and the flight from Philly to DC was delayed.  Finally we took off, five minutes later we were on top of the cloud layer, the first blue sky and sunshine I had seen in days.  We were late getting into Philly, but the flight from there was also delayed, then changed gates, then delayed again as the crew "timed out."  We did eventually make it into DC, I was home before 1:00 AM.
Posted by Travel at 6:00 AM