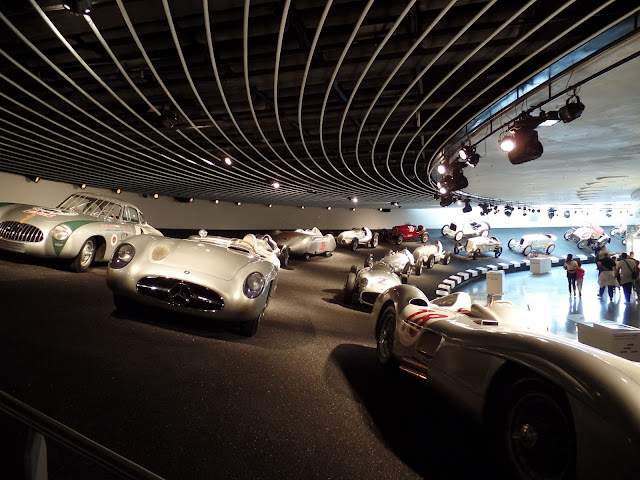 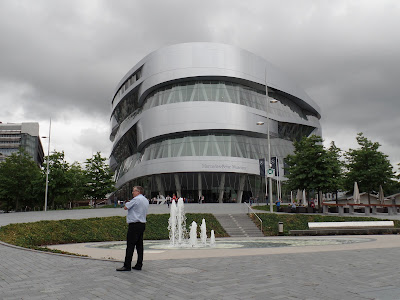 Tickets to the Mercedes museum came as part of the factory delivery package.  We went to the main train station and took the light rail line toward the museum.  First we stopped, then there was an announcement in German, we sat for about 15 minutes and started talking with young man across the aisle.  He was an engineer from Canada working in Switzerland.  He was traveling on weekends, seeing as much of Europe as possible.  He thought from what he understood of the announcement, that there was a change in service, there was - the station by the museum was closed for repairs, the train zoomed by - the next stop was a couple of miles down the road.  The cute young engineer helped us find the shuttle bus, the bus stopped in front of the museum.

I looked at the tickets, and looked at the line, and read the signs in German, and asked "do we need to stand in the ticket line, when we already have tickets?"  J asked, we didn't, away we went.  The elevators in the grand atrium take you to the top and the tour starts there.  The tour runs in a circle around the building, going down layer by layer.  What a fantastic collection and what a fantastic space.  Well worth the day.

When we finished we went outside and discovered that there was a football game in the Mercedes stadium across the street, the streets were closed, the buses were not running.  I braced for a long walk. Just then a taxi turned the corner, I waived, he pulled over and picked us up, taking us back to the hotel.
Posted by Travel at 6:00 AM