The Way We Were Wednesday - De-Stress the Holidays 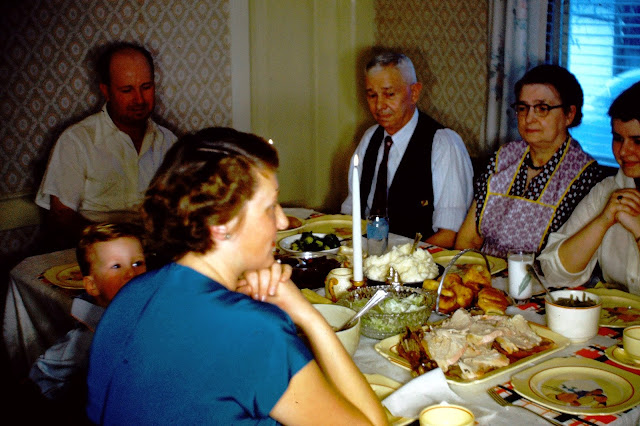 I was on a call recently, and people were stressing about not traveling and being with family this holiday season.  There is a lot of anxiety about this.  People are planning Zoom dinners, one person's family is making dishes to share by dropping them off on family members doorsteps.  I thought for a moment, and had to share my side of stress and holidays, hence the following.

For the first three and half decades of my life, the holidays, especially Thanksgiving were filled with stress and family drama.  One person was obsessed that if dinner late by a minute, the holiday was a total failure.  Another was fussed that if the turkey was not cooked nearly to the point of being petrified, we would all get sick and die.  Another was concerned that the turkey would be dry. Everyone was guessing how late Aunt Edith would be, and we knew she would be late. Edith was 20 minutes late to her own funeral. For years my father and grandfather would re-hash every mistake they made on the farm and debate how to control the weather and crop prices in the coming year. For years I thought the knot in my stomach was from overindulging.

Then in my mid-30’s following love and opportunities I moved 814 miles away. My parents reminded me it was 814 miles. When I moved, to avoid the temptation to bail on change and return to the familiar, I committed to not go home for at least a year. That Thanksgiving I discovered that you could celebrate a holiday without stress and family drama.  It was the two of us, with special treats, time to relax and be thankful.  It was wonderful.  If your holidays have been festivals of stress, this is the year to say, “I am staying home, treating myself, and relaxing.”  Wishing you a stress-free holiday season.

Don't they look happy and stress free in the photo from the early 1950's?

Note: I parted with the "Mexican" china this past year.  It was give aways from gas stations in the early 1930's.  My grandmother had a complete set.  I hadn't taken it out of the box in a decade.  I hope it has found a new home, and stress free family traditions.