The Way We Were Wednesday - John and George 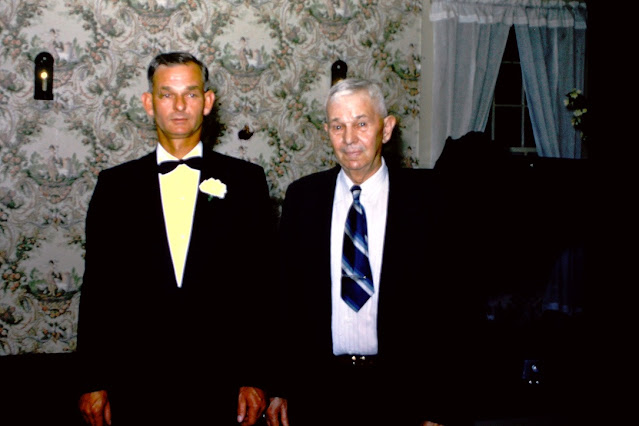 My guess is this was taken at first John's wedding, he was my grandmother's much younger brother, standing there with his father, my paternal-maternal great-grandfather George.   My great grandfathers on my fathers' side died around the time I was born, I know them only through pictures.
John was my grandmother's favorite sibling, she had an older brother, and much younger sister (Floss) and brother (John).  John I met several times, he was a very dignified gentleman. The marriage didn't last for reasons I never knew, nor did his second marriage (her alcoholism and his temper ended that one.)  He had three children, a daughter who the last I knew was in California, and twin boys about the age of my oldest brother.  The last I knew the twins were in Michigan.
John was a manager for an international firm. Back in the 1970's they were building a truck assembly line in Poland.  Things were not going well, and they sent him over to check on things.  When he returned to New York, he said, "we will never get this thing finished unless we pay bribes to the suppliers.  His colleagues were aghast and a couple of them were on a plane to Poland the next week to prove him wrong.  Two weeks later they returned to New York, withdrew $200,000 in cash, packed it in briefcase and sent John back to Poland for two months to finish the job.  Apparently US dollars made the ideal "gift" to delivery drivers in Poland.
He had a a lifetime of stories like that.  I wish I had more opportunities to listen to them.
He should have written a book.
What would the opening chapter of your book be about?
Posted by Travel at 12:00 AM