The Way We Were Wednesday - The Farm 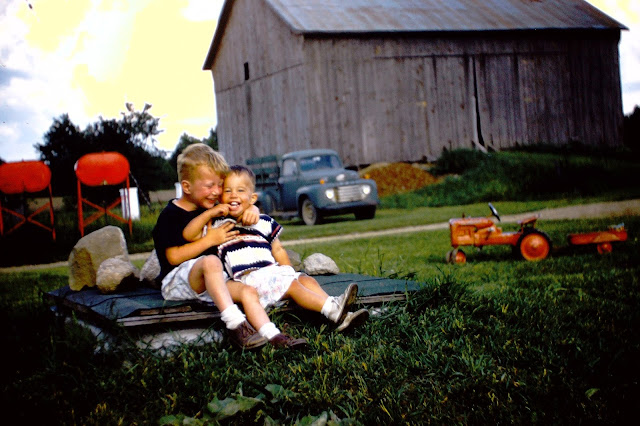 In the middle of World War II, my grandfather bought a farm, about 60 miles due north of Detroit. He needed to move the bees out of the city, and he was a farm boy at heart.  In the early 1950's after my two older brothers had been born, my parents packed in life in the city and moved out to the farm. The redhead on the left is my oldest brother, I am not sure who the other kid is.  They are sitting on the cover for an old well, that was filled in by the time I was their age, though the concrete wall remained, my grandmother planted it with flowers every summer.  The barn is still there.  My father traded away that pick-up truck in 1965, the dealer gave him $50 in trade for it.
After a year or two in the old farm house, this picture was taken in the back yard of the farm house, my parents built a small house around the corner, actually about 500 feet behind the barn, that is where they were living when my sister and I were born, where I grew up.
Posted by Travel at 12:00 AM