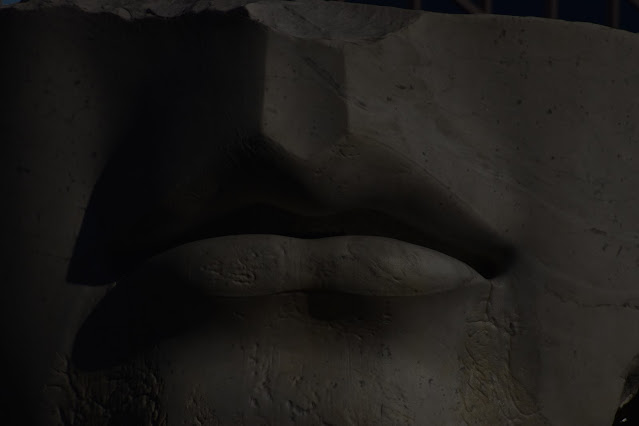 Nope, not something I said and not a photo I took at night. I clicked a setting my camera and didn't notice it for a few days, resulting in 89 massively overexposed images.  I kind of like this one.  The images are so far over exposed that the limited editing software that I have can't totally recover them.  I can lighten them so that they look like daytime, but the color and contrast are off.  Oh well, nothing critically important, all local sights that I can easily revisit (I will post another image of these lips soon.) A couple of the images are better than they would be under "normal" conditions.

I have been carrying really good cameras for over 45 years.  I have only ever broken two.  I dropped one lens down on a stone floor in the Louvre.  When I took the lens off, parts fell out.  I waited for a camera store to open the next morning, and bought a replacement lens, what had broken was the autofocus mechanism in the lens.  When I was packing for Hawaii (the night before I was scheduled to leave) I dug in the bottom of my messenger bag for the compact digital I had been using, and found that the shutter and power control switches were broken off.  It was a nice small camera with a Leica lens, one of the best small digitals I ever owned.  The only back-up I had was rather bulky and heavy, and it was a long trip, and my bags were full.  I was having trouble walking and didn't want to add anymore weight or bulk to what I was traveling with, so all of the photos on the trip to Hawaii were taken with my phone. I have some amazing photos from that trip. The phone made a better camera, than a phone.

The bottom line of all of this, things happen.  Don't let them derail your adventure, roll with it.  The overexposed photos, have a couple of amazing images that I would have never captured if I hadn't hit the wrong button, the lens I bought in Paris, was an amazing lens (one not sold in North America) and I was able to stretch my French far enough to communicate the problem and find a solution. (That was my last major trip done on film, I went digital a year or so later and never looked back.) Relying on the phone in Hawaii, freed me from bulk, and weight, and probably forced me to spend more time soaking in the wonders, rather than pointing and shooting.  (I want to go back there again, while I am feeling and moving well, and when I am not working.)

Have you had a happy Oops recently?