The Way We Were Wednesday - Great Aunt Edith 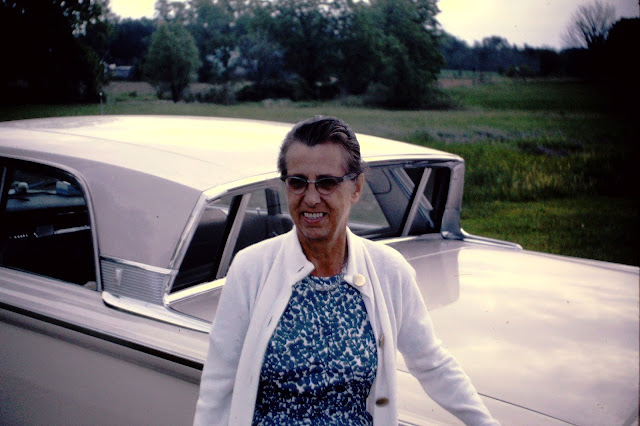 This was my great-aunt Edith.  She was my paternal, maternal-grandmother's, father's sister.  Her first job, as a child really, was in a woolen or cotton mill, then she worked as a maid, and housekeeper in grand English homes, think Downton Manner. She immigrated to the USA, she was housekeeper for part of the Firestone family in the 1930's when my aunt was born (my father spent a month living with her and playing with the Firestone kids, to get him out of the house when his sister was born.)  After the War, she moved to Miami, lived there until late in life, then lived with a Niece in northern Indiana for the rest of her life.  She was a sweetie, never married, kind of makes me wonder after all of these years.

She is standing by one of my grandfather's all time favorite Mercury's. From the time new cars became available after World War II, until he quit driving in the 1970's he bought a new Mercury every other year.  He had two of them, this white one and blue on that had the "breezeway" back window. The rear window, went down behind the seats. The only "power windows" he ever owned.  He was greatly disappointed when Ford stopped offering that option.