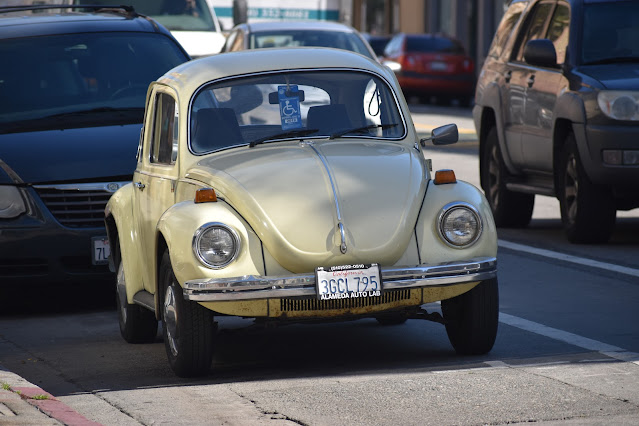 I love the classic VW Beetle, the simple design, with an amazing amount of space inside, the mechanical simplicity.  I came close to owning one once.  It belonged to a neighbor, who was not using it.  We agreed to a price - $1,000 as I recall.  I went back on the agreed time, with cash in hand, only to find it in pieces in the carport. When her son heard she was going to sell it, he announced that he was going to make a dune buggy out of it, and spent the next day taking it apart getting it ready for the fiberglass body.
I long wanted a convertible, my ex never learned to drive a manual transmission, so a Beetle convertible was a challenge.  I actually found one with an automatic stick shift - basically an electronically operated clutch, but she refused to even try that, and I let it slide.  When she was in high school her father bought her an original Mini Cooper, a new one, she was of that age.  She destroyed the transmission in it the first and only time she drove it to school.  He replaced it with a Pinto, had the transmission replaced in the Mini and drove it himself. (waiting for A-Ms comment on the Pinto.)
I have owned two VWs.  I had a Rabbit (Gulf) diesel back in the early 1980's.  I drove the crap out of it for a couple of years, but had almost constant engine trouble with it from the night I drove it home.  I currently have a VW Eos convertible.  It has been a good little car, and I am finally enjoying the top down driving that I had long lusted over.
Ever driven a VW?
Posted by Travel at 12:00 AM