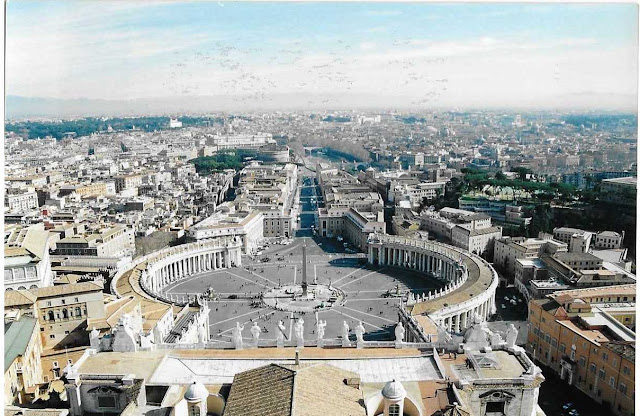 This is not a post card, I took this picture from the dome of St Peters in Rome, the last time I was there.  I am not planning to climb the dome again, but the view is fantastic.

In light of the terrorist activities in Paris and Brussels I have been asked, are you still planning to go to Europe this year?  The answer is a simple yes.  If I change my plans and don't go, the terrorists have won, and I am not going to let them win.  Short of tanks in the streets of Rome and Venice (that would be fun - bring you tanks to Venice - I'll still see the city while you try to swim) I am going.

Way back in January of 1991, Bush senior bombed Baghdad on a Wednesday night, and I flew to Europe on Friday night.  I didn't let the increased security risk stop me then, I am not going to let it stop me now.  Now back in 1991, it did dampen a lot of travelers enthusiasm, as I recall there were about 30 passengers on the 747 going out of Atlanta that night.  They seated us all in Business class and turned off the lights in the back of the bus. It was an infamous night in aviation, Eastern Airlines ceased operations that evening.

I will be careful, not spend time loitering in train stations and public areas of airports. It is a great excuse to avoid crowds, something I generally try to do anyway.  I am not staying in hotels likely to be used by American businesses or the government.