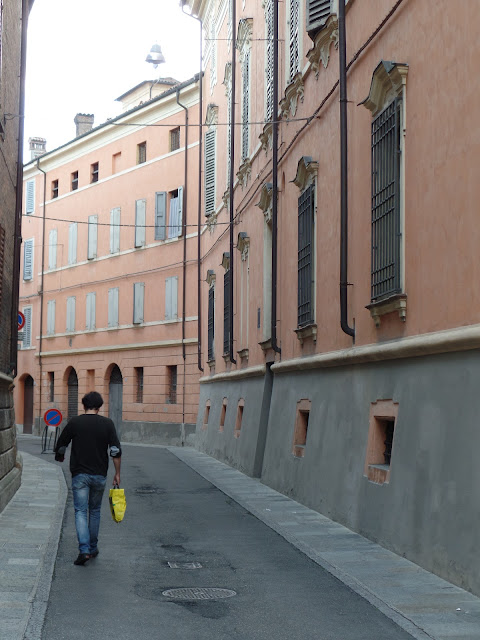 How did we end up visiting Modena, Italy?  We started off in Rome, Jay was taking part in a conference in Rome, the conference dictated the location for the trip.  We were in Rome for several days, we talked about going south to Naples, or northeast to Venice.  I was reading mixed reports about Naples, most of them saying get in and see Pompey and get out, so we settled on Venice.  We took the train from Rome, changing in Florence, onto Venice.  Between Venice and returning to Rome to fly home, we had a few days.  I looked at the map for what was part way in between.  Modena caught my eye, because of Balsamic Vinegar, when I zoomed in on the map, there was the Ferrari museum.  A quick google search later, and I discovered the Ferrari history museum is in Modena, and the factory with the racing museum is at Maranello, with shuttle bus service between the two. The train connections were good, the mainline from Venice into Bologna, and a local train north from there.

Modena is a neat city on it's own.  There is a large University, a nice pedestrian and shopping area - that had a street market on the day we were there.  There is Balsamic vinegar, and parmigiano cheese - lots of amazing food.  We passed the Maserati headquarters on our way to Maranello.  It was really neat.

And we ended up there, because I needed someplace between Venice and Rome, and I wanted someplace we hadn't been (Florence was an option, but we had spent a week there once.) I need to pick more random places that just fill out the agenda.