The Way We Were Wednesday - Cars and Trucks 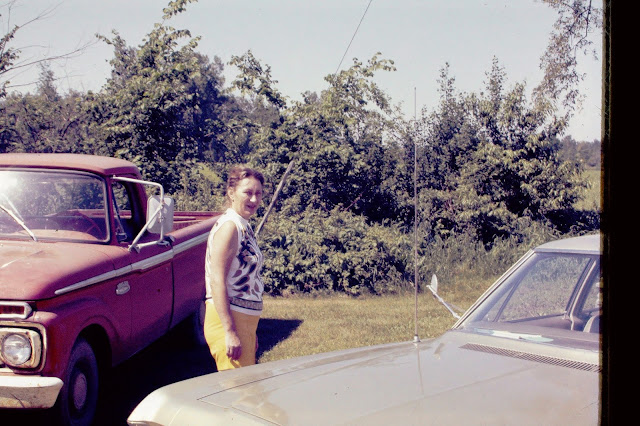 This was taken sometime in the early 1970's.  The greenish chevy was my maternal grandparents.  I think it was like a 67 or 68.  They drove it for a few years.  When my grandfather developed serious heart disease in the early 1960's they sold the farm, bought a large travel trailer, and started touring spending summers someplace in Michigan, winters in Florida.  My grandfather was not happy with the way the car pulled the trailer, and after just a few years, they bought another pickup truck.

The red pickup truck, was a 1965 Ford.  It was the farm pickup truck until my paternal grandfather retired in the early 1970's.  He kept it as part of transferring the farm to my father. He only drove it for a few summers, before his Alzheimer's and failing eyesight led him to the decision to quit driving (his choice - it was touching - and so nice that it was his decision.) The spring after I turned 16, my father bought it, made it mechanically sound, and handed my sister and I keys to it, and a key to the gas pump on the farm, and said, take yourself wherever you need to go.  The spring after my sister finished high school and left home, he sold it to a friend, handed me keys to the family car, and two other trucks that were parked around the yard. One was a monster of a Dodge with a huge engine, and an old Chevy flatbed that had been a utility company fleet truck - he bought at auction for something $500.  My sister was upset, she had never been given unlimited use of the family car.  The Dodge pickup truck, was way overpowered, I would go north a mile and half to the nearest paved road, turn right and floor it, and it would spin the tires for a quarter of a mile. 40 years later I admitted to my father that I took joy in that, he said, "I knew you did, I could hear it from home," he said he did the same thing. One of the reasons he bought it was it had a ridiculously huge engine.