The Way We Were Wednesday - Lunar Eclipse and Meteor Showers 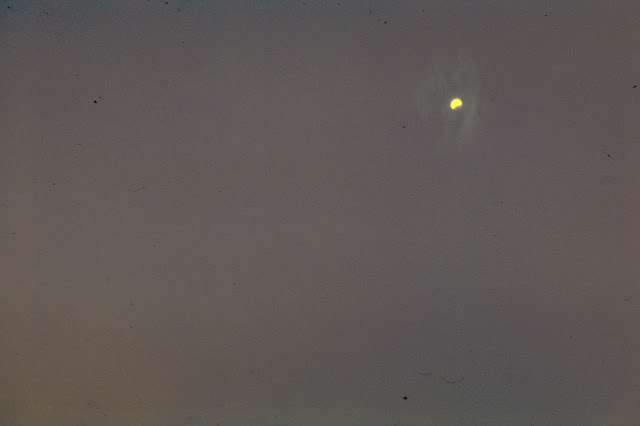 There was one major advantage to growing up on a farm in the middle of no-where, it was very dark at night. The bottom 1/4 of the moon is shadowed in an eclipse in the slide above from some time in the mid 1970's.  The nearest "streetlight" was in a barnyard nearly a quarter of a mile away. It was dark with very little ground light to interfere with the night sky. I loathe the term light pollution, light is not pollution it is something mankind has learned to control, but it does little harm. This was the best photo of that night, the clouds moved in rapidly after this was taken - and it was COLD.

Standing in that yard, I saw the northern lights.  We were far enough north, without ground light interference to see the night sky pulse and glow with electromagnetic luminance.  The internet defines this as, "The bright dancing lights of the aurora are actually collisions between electrically charged particles from the sun that enter the earth's atmosphere. The lights are seen above the magnetic poles of the northern and southern hemispheres."

We had a major meteor shower one summer.  We could stand out at night and see them flash by, one fragment streaked in through the sky, growing ever brighter and landed in a neighbors cow pasture, never to be found (either landed in a small creek, or deeply embedded itself into the ground.) That was a surreal experience.  I can easily understand how if you didn't know what was happening and understanding the basic science behind it, you would think that the world was coming to an end, or the gods where arriving.

Can you see the night sky where you live now?