The Way We Were Wednesday - Motorhomes 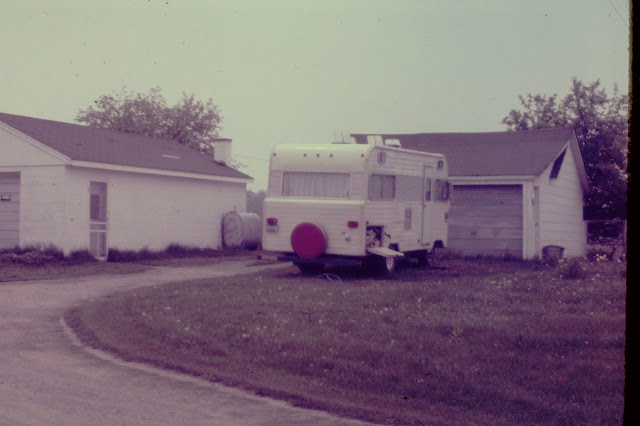 A few weeks ago, my Wednesday post featured a picture of my grandparents tiny Florida winter home.  Getting out of Michigan in the middle of winter was always a welcome idea.  My parents started doing it when they were down to two kids left in school.  My Aunt Edith and Uncle Dick, started going for 2 to 3 weeks at a stretch.  Accomodations in the tiny house in Istachatta, left a lot to be desired.  Dick was talking with a farming friend one day, who knew someone, who knew someone who had just died, owning a Winnebago that no one in the family wanted.  Now Dick was not really a farmer, he grew up on a farm, he spent countless hours helping friends on farms, in reality he worked in research and development for Ford, he ran cars on treadmill tests.  But many of his best adventures started on one farm or another. The Winnie was a few years old, and had less than 12,000 miles on it.
This was not the first surprise that Dick brought home to Edith, at least this one didn't have four legs and a tail and go moo!  His thought was that they could drive it to Florida, and have reasonably comfortable place to sleep.  It worked, they drove the thing to Florida a dozen winters.  As their baby passed 6 feet tall and 275 pounds the accommodations grew a little tight, (my cousin is a giant of a man) so they traded it on a new one, one about 10 feet longer.  The next week, Dick's boss called him into the office and offered him an early retirement buyout. He said, "oh I can't do that, I just bought a new motorhome with three years of payments."  His boss came back a few minutes later and said, "we will pay you in a lump sum for those three years if you retire on Monday." He called Edith to ask what he should do, strange he called and asked first.  They moved to Florida that year.
When I find a picture, I will talk about my parents misadventures with a motorhome.  It has a rather surprising ending.
Any motorhomes in your family stories?
Posted by Travel at 12:00 AM