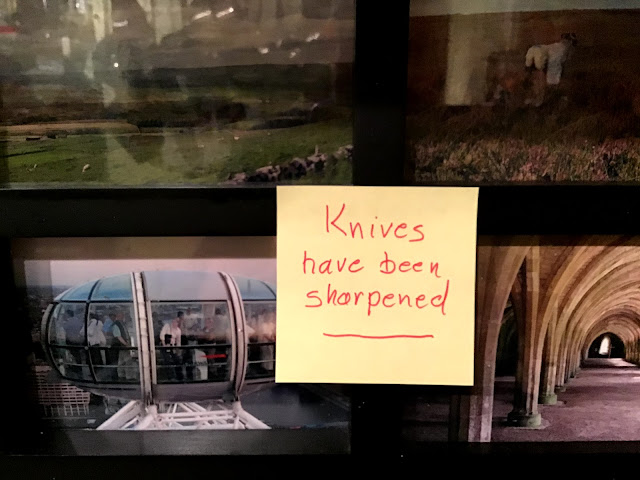 J sharpens the knives, and leaves me warning signs. This sign appeared on a photo frame above the sink in the kitchen.  When he is done, if you press your thumb against the blade, you will cut yourself. I have to agree it is true, if you handle them properly you are no more likely to cut yourself with a sharp knife than a dull knife.

I grew up, learned to cook, as many of us did, in a family that really didn't have good knife skills.  My mother used a short paring knife for  everything, except slicing a roast or a turkey, and for that she used an electric knife.  Most of the knives in her kitchen, as my great-grandmother would described them, "were so dull, you could ride bare assed to Boston and back and not hurt yourself!" (I have a feeling she was a real wild one in her prime - she was frail and well into her 80's before she moved out to the farm.)

As an adult, I started to read a lot about cooking, and almost every text on cooking technique starts off with knife skills.  They all say, get a proper 6 to 10 inch chef's knife and learn how to use it. Used properly, it becomes the go-to knife in the kitchen.  And I did. Starting at first with the big knife that came as part of a cheap set of knives.  Later moving onto better quality.  Learning to slice, chop, dice, and mince, and how the various cuts impact cooking and the finished dish.

I have never spent hundreds of dollars on a knife, I am after all a little bit stingy at times.  But I have had some decent Henckels knives over the years.  Little stays in my kitchen that does not run in the dishwasher, so I generally stay with stainless steel.  High carbon steel they say will hold an edge better, but not stand up to the dishwasher as well.  Often the handle fails before the knife does.  My current go-to knives are from IKEA, in all stainless steel.  I have three of them, two with flat blades - a quasi Japanese style, and one more spear shaped or traditional chef's knife design.

There are books, and tons of YouTube videos on knife skills.  Probably the best advice on learning knife skills, is study the pro's and practice.  Onions are a great way to practice, onions can be relatively inexpensive, and when you are done they are wonderful to cook with.  I have joked that all of my dinner recipes all start with "take one onion."

How are your knife skills?